“The Jewel of Western Oklahoma” 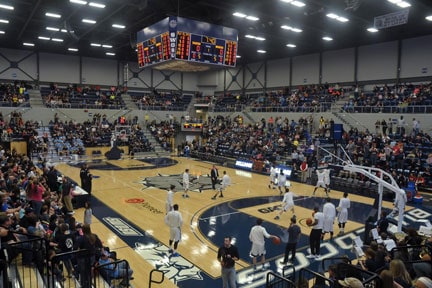 The sun shone brightly throughout the day on Saturday in Weatherford.  That evening, it was the Pioneer Cellular Event Center’s turn to shine.

Southwestern opened wide its doors to let the community and the state see its new and beautiful facility.

A crowd was sure to be drawn on this night anyway.  Add to the mix the fact that another chapter in the Southwestern/Northwestern rivalry was about to be written and it became a can’t miss event.  The people didn’t miss it.

Todd Thurman, Southwestern athletic director, was excited to invite the people to his campus to show off the new arena.

“It’s a huge day for Weatherford and for western Oklahoma,” Thurman said.  “This building is something that nobody has from anywhere from Amarillo to Oklahoma City, from Wichita Falls to Wichita.

“We wanted this to be the jewel of western Oklahoma and I think we’ve accomplished that.  This is a very special building.”

More than 2,500 were in attendance for the first collegiate games to be hosted in the PCEC.  High school games had been played through the week leading up to SWOSU ball games. But Thurman said this night would officially tip things off.

“To us, this is our grand opening,” Thurman said.  “And I’m talking about Southwestern Oklahoma State University’s grand opening.  We’ve been playing the West Central Tournament this entire week and it’s helped us to work out the kinks and things that weren’t quite well, we’ve been able to get in and fix them.

“We’ve wanted to kick this thing off right.  I think our student body is excited.”

The excitement was tangible from the students and the arena at large.  Great American Conference commissioner Will Prewitt was in attendance as well to watch SWOSU play its first games in the new home.

“It’s a beautiful facility and a great addition for the GAC and Division II,” Prewitt said.  “The people of Southwestern have a lot to be proud of.”

A large video board was in play to set up each of the games, a drop-down scoreboard over center court displayed game stats and there were activities for the fans through the evening.

And the ballgames themselves provided much entertainment and reasons to keep the excitement level high to the end of the night.

The Lady Dawgs won in the opening contest, 87-68, over the Rangers.  SWOSU senior Sarina Sayama connected on eight three-pointers to the delight of the home crowd.

Southwestern senior Sarina Sayama had 26 points for the Lady Dawgs in her team’s win in the inaugural contest at the PCEC. Photo courtesy SWOSU Sports Information.

Southwestern coach Kelsi Musick spoke about the atmosphere in the PCEC in regard to her team and the crowd.

“I think it was the best they’ve ever seen,” Musick said.  “You know, opening up such a phenomenal center and then having such a great crowd,  they were into it and it was pretty much a packed house.

“We couldn’t have asked for anything better, especially on opening night.  That’s what these players want, that’s what they dream of as little girls is to come to a place that is so nice and so amazing.”

The Bulldogs were on the short end of the second game of the night, but it didn’t lack in drama.  The contest went back and forth through the final five minutes and had four lead changes in the last 32 seconds.

Northwestern won, 67-66, on a T’aries Taylor running jumper that went through the net as time expired.

And as the Bulldogs are breaking in the furniture in their new home, the PCEC will see more basketball than just SWOSU games.  Thurman said that it was designed to better suit high school tournaments and playoff action, as well.

“One of the issues with the old gym, we had enough to handle the one game – the setup for two towns coming in.  But when you have No. 3 and No. 4 towns standing in the lobby and they can’t get in until we run everyone out, that’s the difference between that facility and this one.

“We can hold more than 3,000 people in here.  We have an upper deck so they can wait their turn until it’s time for them to come down and enjoy their game.  That’s really has made a difference in being able to accommodate as far as the OSSAA is requiring and what the schools and the towns are requiring these days.”

But the Event Center isn’t limited to just basketball.

“We have designed this building to do almost anything from conferences to concerts and these type of things,” Thurman said.

“My president is Randy Butler from Butler Ranch. And he keeps wanting to put dirt on the floor and run a rodeo and I keep telling him, ‘No, it’s not designed for a rodeo.’  But we can do almost anything else.

“We have it so that we can divide some areas into breakout rooms.  We have a 30-person stadium seating film room.  We have things we can do to accommodate almost anyone. We have special rooms if someone doesn’t need the entire arena.

“I think we can do almost anything, except like I said, rodeos.”

And for the people of Southwestern, this day has been a long time coming.

“When I became the athletic director in 2008, there were three things we said we needed to do: we need to get our budgets in the proper area, we need to get the right people in place and we need to get better facilities.

“So the vision of this started in 2008.  We got going with it and nobody really thought it would happen, but now here it is in 2014 and there it stands.”

The potential benefits for SWOSU are long-term and just like the uses for the building itself, not limited to just basketball.

“It’s one of the greatest things that could ever happen, and not just for the sports that are playing in there.  We have a VIP room upstairs that overlooks our football field.  So this is something that is good for everybody, not just sports.  Our entire university can come over here, because this is a beautiful and special ‘wow’ factor when it comes to recruiting.”

Thurman was sure to not take away from the historical context or even what his university has in Rankin Williams Fieldhouse, now the “old gym.”  But he said he recognizes the differences in reaching the current generation.

“Kids today are visual.  To me, the old gym, as a coach and as a player, it’s a great place because it’s right on top of you and it’s loud.

“But when the kids walk into this building, that’s a difference maker for us getting them or not.  So I think it’s a major game changer, again not only for the sports that are in here, but also for all our sports in the university as a whole.”

The games on opening night for Southwestern resulted in an outcome that was split with its rival.

But there seemed to be no split in the conclusion that the day was a success.  And the promise of more days like this is a sure thing.