The need to finish 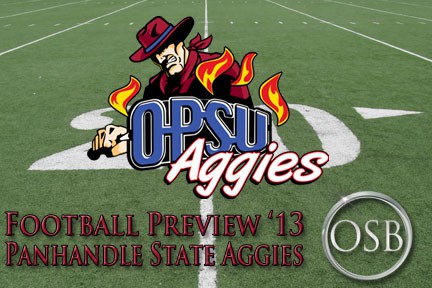 For the first time since 2010, the Oklahoma Panhandle State Aggies are coming into a football season with the head coach that was there the previous season.

Coach Russell Gaskamp has been working hard to get his team ready to play and get over that hump for a winning record.  OPSU last had a record better than .500 in 2010, when it went 6-5.

The Aggies were 4-6 in 2012, but Gaskamp said his believes his team missed opportunities.

“Our team lost three games last season and two versus in-state opponents that we were up by double-digits in the fourth quarter,” Gaskamp said.  “What I take out of that is our need to finish.”

The Aggies’ preparation began in the spring and the theme of finishing is multi-faceted.

“Our kids know they left a couple on the table last year and I think that made us hungrier going into this season.  We felt like we should have had a winning season last year and our guys are doing everything it takes to get to that level this year.”

The Aggies offense had some high points last season, putting up more than 60 points in a couple of blowouts over young programs.

Gaskamp will need a big year from junior quarterback Caleb Holbrook to reach the team’s goals.  Holbrook completed 51 percent of his passes in 2012 for more than 1,100 yards with seven touchdowns.

Holbrook should have a host of receivers to which to throw with junior Timothy Hollingshed leading the way for returnees, along with a host of recruits for Gaskamp at the wideout, and expecially tight end positions.

The offensive line is a strong and experienced group with tackle Marcus DiMando anchoring the left side and garnering a preseason All-America nod.

The Aggies return four of defense that were the top of the list in tackles in 2012.  The secondary has senior Keidrick Brewster, who was tabbed a preseason second team All-American, and junior Dominique Guest.

Gaskamp was excited about the returners, transfers and incoming freshmen that will make up the Aggie secondary.

“We really feel like that group is going to be our strongest point on defense,” Gaskamp said.

Nate Mathurian also received praise from Gaskamp.  The linebacker was near the top of the list of tackles, tackles-for-loss and had an interception and is also quick and strong.  But his coach saw even more.

“The guy stayed here all summer and worked his butt off.  He’s going to be a good leader for us.”

Isaia Vimoto, is moving from the secondary into a linebacker role and Tanner Hallford will see time there as well.

The experience in those two areas is going to be called upon to help with a defensive line that will be filled by young players.

Aggie punter Antonio Mendoza also made the All-American list as a second-teamer on special teams.

“There’s just a lot of excitement on the campus right now,” Gaskamp said.

And it will be a part of the atmosphere at each of the four home games.  Every game at Carl Wooten Field in 2013 will be accompanied by activities to bring the fans.

“It’s not just all about football.  It’s about family and unity and about our community coming together.

“We want to get as many people coming out as we can. But that means that we’ve got to go win football games.  They’ll be excited as long as we’re doing that.”

And Gaskamp said he knows that his team has been putting in the work to do just that.  And OPSU is looking to 2013 as a year to see each game through to the finish.