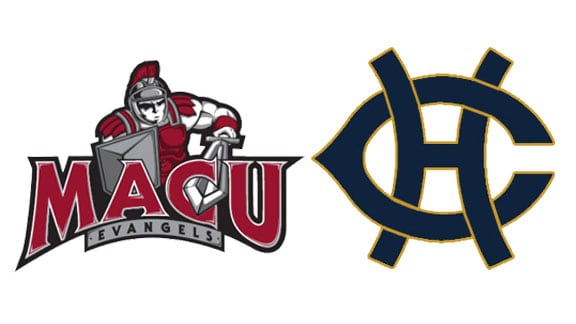 Just 8.4 miles separate the campuses of two of the hottest teams in college basketball this March.

No, this isn’t referring to Tobacco Road that separates North Carolina and Duke. The distance between those two is 10. 5 miles.

This is even closer. And the trip involves travel on S. May Ave. and SW 34th St.

The southern part of the Oklahoma City metro area is home to two programs that have won national championships in 2016 – Mid-America Christian and Hillsdale Baptist.

MACU just came off a run through the NAIA Men’s Basketball Championship Tournament, winning five games in six days in Kansas City. The Evangels capped the event with a 100-99 overtime victory over Georgetown (Ky.) to capture the first NAIA national championship in program history.

The week before Hillsdale followed its NCCAA regional championship with a three-day run through the national tournament in Ankeny, Iowa. The Saints earned three wins in three days and took the title game, 97-84, in overtime over Grace Bible (Mich.).

And neither championship should have come as a surprise. Each program has been building toward these titles.

MACU made a trip to the NAIA Elite Eight in 2015 and was ranked in the NAIA Top 25 in the final nine polls of the season, never lower than No. 15.

The Evangels had numerous players receive weekly conference awards and had OSN Player of the Year in Nick Tate. Josh Gamblin won the NAIA Coach of the Year Award.

Hillsdale was the NCCAA D-II national runner-up in 2015 and carried the No. 1 ranking throughout the regular season.

The Saints brought in numerous NCCAA honors, culminating in the National Player of the Year Award earned by Trey Sneed. Mark Berokoff was also tabbed the NCCAA Coach of the Year.

There are many similarities, but the main one is that both schools had successful seasons from start to finish and each finished at the top.

And the Sooners also have what appears to be an important factor as they head into the Final Four on Saturday looking for a national championship – they are from Norman.

In the South OKC area.