The rivalry is on! 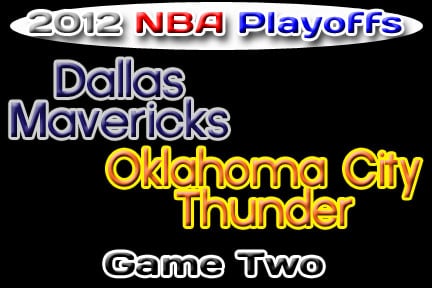 Physical proximity between two teams doesn’t always mean that a rivalry will develop – though it doesn’t hurt either.

With the tempers brewing and fuel being added to the fire with every hard foul or intense box out for a rebound, the aforementioned rivalry status is taking shape with the Oklahoma City Thunder and the Dallas Mavericks.  Add to the equation that this is the second consecutive season in which the two teams are meeting in the playoffs and “it’s on!”

But the Thunder seem to have turned the tide since last year’s exit in five games.  Oklahoma City held on Monday night for another eek-it-out victory in Chesapeake Energy Arena, winning 102-99 despite not hitting a field goal in the final 4:50 on the game.

Including the preseason (which we shouldn’t, but…), OKC has beaten Dallas seven of eight contests in 2011-12.  There is even talk on Dallas sports talk stations of a possible sweep by the Thunder in this first round matchup.