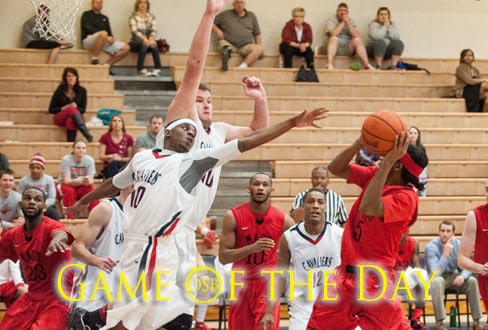 Thornton was 6 of 8 from the floor in the second half and scored six in the final 1:06 to keep the Evangels at arm’s length. His two free throws with 12 seconds to play put the Cavs up 96-92, and Semar Farris’ trey from the wing with seven seconds to go missed the mark.

It was an exciting finish to a game in which the home team led by as many as 14 points. MACU battled back in the second half, though, tying it at 88 on a Jarius Wilson three-pointer with 1:16 to play. Thornton responded with a bucket and was fouled on the next possession, but missed the free throw.

SGU’s Josiah Campbell, who came in ranked No. 6 among Division I players in rebound per game, pulled down a huge offensive board, though, and Thornton was able to make it a four-point game at the 53-second mark with two free throws. The Cavs made six of their final seven from the charity stripe to secure the win.

“Just a great college basketball game against a great team in Mid-America Christian,” said SGU head coach John Martin. “After we gave up the lead there late, our guys showed a lot of poise in handling the pressure and executing. Just like with Marty (Wilkerson), we are very comfortable when T.J. has the ball with the game on the line. It was a tremendous win.”

Two of the nation’s top scorers in MACU’s Farris and SGU’s Wilkerson held true to form. Farris totaled 28 on 9 of 20 shooting, while Wilkerson posted his 20th 20-point game of the season, finishing with 27 on 11 of 22 from the floor.

The win puts the Cavs in third place all by themselves at 11-7 in what has turned into a rugged Sooner Athletic Conference slate. SGU is one game back of second-place Oklahoma City in the standings.

“There’s no question that the SAC is the toughest league in the country this season,” Martin said. “I’m very proud of what our guys have been able to accomplish in such a competitive conference. To have 20 wins overall against our schedule is certainly commendable, and it’s something I know will help us as these final rankings come out.”

SGU’s win was also the seventh against ranked opponents this season, including two wins over then-No. 2 LSU-Shreveport. The Cavs improved to 12-1 at home and 14-4 in games decided by 10 points or fewer.

SGU finished at 55 percent from the floor for the game compared to the visitors’ 49 percent. MACU held a 38-33 advantage on the boards, but their 15 turnovers led to 16 points for the Cavs.

The Evangels had six in double figures, including Angelo Lewis’ 16-point effort. Jaron Vierra contributed 18 on 6 of 9 shooting for SGU, while Brock Vorwald came off the bench to score 12 of his 14 in the first half.

The lead changed hands seven times in the first 7-plus minutes of the game before the Cavs finally took charge. Down 19-18 with 12:25 remaining, SGU went on a 21-8 run over the next 6:39 to turn the deficit into a 13-point advantage. Six different Cavs scored during the spurt, while the Evangels managed only two field goals during the stretch.

The home team led 54-42 at the break after finishing 59 percent from the floor. MACU wasn’t far behind, going 15 of 30 in the first 20 minutes. The Evangels had a 17-14 rebounding edge, but the Cavs got quality minutes from the bench. SGU had a decisive 21-4 advantage in that area.

Farris had 17 points on 6 of 10 shooting for MACU while Wilkerson finished with 16 on 7 of 13 from the floor in the first half.

After a Thornton trey made it 75-62 with 12:47 remaining, the Evangels began their run to get back into the game. MACU outscored the home team 13-3 over the next 3:13 to make it 78-75 with 9:34 remaining. Farris hit two three-pointers and Josh Minner capped the spurt with a driving lay-up.

But a pair of Thornton free throws and two driving lay-ups by Jaron Vierra increased the advantage back to 84-77 for SGU. It was 86-79 after Wilkerson hit a floater with 5:04 left, but the Evangels again countered by scoring nine of the game’s next 11 points to tie it at 88 and set up the final sequence.

SGU returns to action Thursday with a SAC showdown against No. 4 SAGU. Game time is set for 8 p.m. in Waxahachie, Texas.