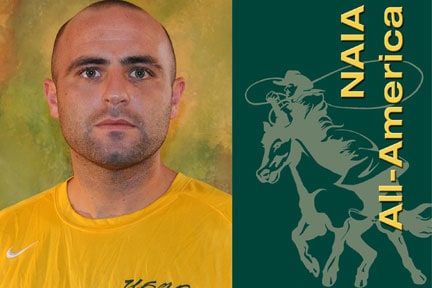 CHICKASHA – After a fourth NAIA Men’s Soccer National Tournament run, three Drovers were named to the elite NAIA All-America list — including a first ever First Team recipient for Drover soccer.

“I’m speechless and so grateful. It’s not sinking in,” Parkinson said. “Credit has to go to my teammates first and foremost and not just this year’s squad, but every play who has ever been here … awards like this are not given to unsuccessful teams.”

“I’m proud of all three players in this honor,” Head Coach Jimmy Hampton said. “They are great representatives of USAO and all very deserving of this prestigious honor. It’s just another sign that we are attracting the top student-athletes to USAO. This is also a great reflection of our team and the success they earned as a team.”

USAO is the only NAIA school in the state to have any players in men’s soccer named All-America this year.

Hampton, who was named Sooner Athletic Conference Coach of the Year this season, acknowledges his assistants as being key to training the players.

“Congrats to Assistant Coach Alexis Vizarelis as well as he trains Byars and is the finest goalkeeper trainer around,” Hampton said. “It also reflects assistant coaches Tony Orsi and Tommy Hubbard in the development of these young men. Congrats, and I’m very proud of these particular three men, our team and our assistant coaches.”

Parkinson has been showered with awards this season after anchoring the back line that allowed just 11 goals all season and earned 11 shutouts.

This is the second year in a row Parkinson has been named All-America, pulling in Third Team honors last year. Also in 2011, he was named SAC Defensive MVP, and he earned All-Conference Second Team honors as a freshman.

In addition to giving his teammates credit, Parkinson is sure to give his coaches their deserved recognition.

“Credit also has to go to my coaches,” he said. “When I arrived in Chickasha, I thought I knew how to play football, but learned pretty quickly I wasn’t very good. All four of my coaches have stuck at me every day in training, teaching me how to defend properly, and I’m still not there yet.”

While Parkinson plays defense for the Drovers, he scored USAO’s only goal in a 1-1 tie against Oklahoma City in the SAC Tournament and helped out with two assists this season, including one on the game-winning goal in the NAIA Men’s Soccer National Championship Opening Round, which the Drovers went on to win 2-0.

In addition to being a leader both on the field and in the classroom, Parkinson double-duties as the head boys’ soccer coach and assistant girls’ soccer coach at Chickasha High School.

He is from Liverpool, England, and is the son of James and Susan Parkinson.

Sansford, also just a junior, pulls in All-America Third Team honors after leading the Drovers with 15 goals on the season.

Sansford not only led the 2012 Drovers, but also the Sooner Athletic Conference in goals and was named both SAC Most Valuable Player and Offensive Player of the Year.

In two years at USAO, Sansford has had 27 goals, seven assists and 11 game-winners. He is tied for second in the USAO history books in game-winners.

He is a physical education junior from Colchester, England. He is the son of Perry and Ordelia Sansford.

Leading the country in goals against average, Byars was named All-America Honorable Mention.

Byars, who finished the season having given up just 11 goals and collected 11 shut outs, also earned SAC Goalkeeper of the Year honors.

As just a sophomore, Byars is tied with his coach, Vizarelis, in USAO history in most career shutouts with 21. He’s also second in the record books in career goals against average at 0.651, third in career wins with 31 and tied for fourth in career saves with 114.

With a strong back line, Byars had 47 saves on the season and collected 14 wins. For his career at USAO, Byars has earned a record of 31-6-4.

Byars was named SAC Defensive Player of the Week twice this season and was named All-Conference First Team last year.

He is a physical education and business management sophomore and is the son of Danny and Pauline Byars of Oklahoma City.