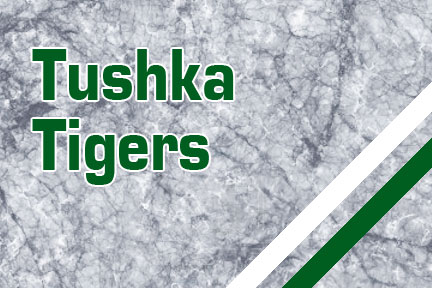 The Tushka Tigers ended the slow-pitch softball season in the spring of 2015 with a win in the state championship game. Their fast-pitch season is headed that direction in the fall of 2015 as well.

Although the season contains only wins so far, it hasn’t gone exactly the way head coach David Durbin planned it.

“We’ve battled a lot of injuries at the start of the year,” Durbin said. “For the first 13 games of the season, we were without two starters and after Week One, we had another starter go down.

Durbin said in fast-pitch, it all starts with the pitching and that he has gotten quality work from junior Sadi Avants.

“Sadi Avants is doing a good job. Last year, she struggled a bit with command, but this year her command is a lot better. She’s moving the ball in and out and she’s doing well.”

Durbin also talked about the offensive production he is getting near the top of the order.

“Peyton Mobbs in the 2-hole has had a great start and I think she’s hitting above .600 right now. She’s getting on base and allowing us to score runs.

“Sadi is our 4-hole and if it comes to two outs and we need a two-out base hit, she delivers for us during the first part of the year. Braydon Tisdale (batting third) has also had a great year and she’s hitting above .500.”

There have been plenty of big wins for Tushka this season, but they haven’t always come easily. Six of the 16 wins on the year have been by one run and the final two games of the Rock Creek Tournament went to extra innings.

But Durbin said his girls are accepting their roles and that is what makes the difference.

“Kids understanding their roles and buying in have been the big keys to our success. It’s all about unselfishness.”

And as the Tigers are getting players back from injury, they look to be a team that could playing for a trophy to match the one the slow-pitch team took home in May.

Tushka hosts Colbert on Thursday before going to the Prague Tournament this weekend.