Thunder Charge Past the Bulls 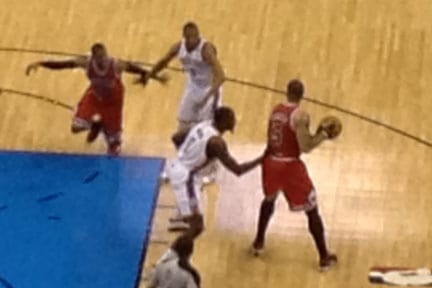 Just one week after convincingly defeating the Miami Heat, the Thunder extended their win streak to six games in an impressive victory over the Chicago Bulls Sunday at the Chesapeake Energy Arena.  Oklahoma City never trailed the team with the best record in the league on their way to defeating the Bulls 92-78.

The final score does not fully indicate the Thunder’s dominance on the court Sunday afternoon.  The Bulls were still in it when OKC led by 10 points at the half, but in the third quarter, Oklahoma City outscored the Bulls 31-12.  Russell Westbrook led all scorers with 27 points, followed closely by Kevin Durant with 26.  Durant also added 10 rebounds to get the double-double.  The duo combined to shoot almost 62% from the field.

On the defensive end, Serge Ibaka had five of the team’s nine blocks and also grabbed six defensive boards.  Cole Aldrich added two blocks when he came in the game at the midpoint of the fourth quarter.  The Thunder’s defensive effort was what impressed Coach Scott Brooks who said, “There is no question we played our best defense of the year.”  Energy and effort made every possession a challenge for Chicago as they shot only 33% for the game.

Chicago was playing without the league MVP, Derrick Rose.  It was the 10th consecutive game without Rose, but the Bulls have played well without their star, defeating some teams they will likely meet in the playoffs.

With this victory, the Thunder officially secured a spot in the playoffs and move to a 40-12 record for the season.  They now trail the Bulls by only one game, and they won the tie-breaker should one be necessary if the teams were to meet in the NBA Finals.  The Thunder also sit with a three-game lead over the San Antonio Spurs for the best record in the Western Conference.

OKC’s starters did not see minutes in the fourth quarter, a fact they will appreciate as they prepare to face the Memphis Grizzlies on Monday night in the second half of their back-to-back.