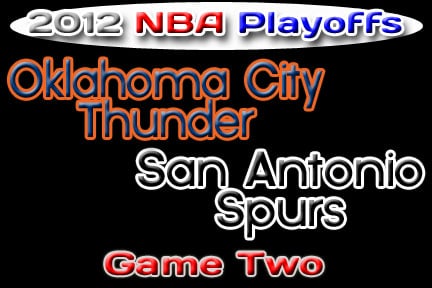 The Spurs squelched a Thunder comeback Wednesday night by hitting some big shots when it mattered to get the 120-111 victory and take a 2-0 lead in the Western Conference Finals.

After falling behind by 22 points, the Oklahoma City Thunder cut their deficit to only six points in the fourth quarter, but it wasn’t enough.

The Thunder fell behind by 11 at halftime, and the Spurs extended the lead in the third.  With the Spurs raining threes, Thunder Coach Scott Brooks decided to change his strategy.  The team took advantage of Tiago Splitter’s less-than-stellar foul shooting, fouling him repeatedly to send him to the line.  OKC was able to regain a little ground and begin to generate some momentum on offense in that stretch.

Essential in the comeback were the Thunder’s big three: Kevin Durant, Russell Westbrook, and James Harden.  Durant had 31 points, followed closely by Harden with 30.  Russell Westbrook added 27 points along with 8 assists on the night.

Aside from the Hack-a-Splitter routine, three technical fouls were assessed during the game.  Coach Scott Brooks received one when he disagreed with a call.  Serge Ibaka and Stephen Jackson were assessed double-technicals at the end of the third quarter.  As the series heats up, these two teams show no signs of backing down.

The Western Conference Finals now move to Oklahoma City for two games where the Thunder will look to its home crowd to lift them past the Spurs and even up the series.