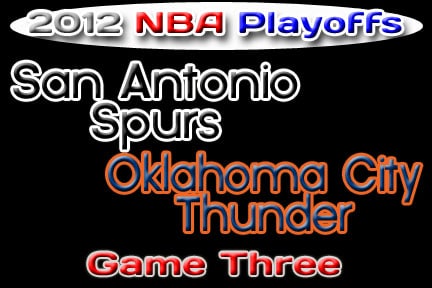 OKLAHOMA CITY – After losing the first two games of the Western Conference Finals in San Antonio, the Thunder came out in Game Three with a sense of urgency that translated to a 102-82 route of the Spurs.  San Antonio had a 20-game win streak, but that ended in dramatic fashion in the Chesapeake Energy Arena on Thursday night.

OKC started the game with an 8-0 run to put the Spurs on their heels.  After a quick timeout, they came back and played a good first quarter to lead the Thunder 24-22.  In the second quarter, however, the Thunder exploded to outscore the Spurs 32-17 and take a 13-point lead into halftime.  The Spurs tried to rally back, but the Thunder defense would not allow it.  When the Thunder took a 27-point lead with 6:35 to play in the fourth, Thunder Coach Scott Brooks decided his starters could take the rest of the night off.

The win was a total team effort.  Five Thunder players scored in double-figures, led by Kevin Durant with 22.  Serge Ibaka and Thabo Sefolosha combined for 33 points, and James Harden added 15 off the bench.  Point Guard Russell Westbrook only had 10 points on 5-15 shooting, but he dished out 9 assists and came up with 7 rebounds, 4 steals, and 2 blocked shots.

One of the notable changes from Game Two was the decision made by Brooks to match Sefolosha up with Tony Parker.  Sefolosha managed to hold Parker to only 16 points after he scored 34 in Game Two.   The Thunder defense was electric, coming up with 21 turnovers, six of which were steals by Thabo.  Those turnovers led to 20 Thunder points compared to the seven points the Spurs got from OKC’s eight turnovers.  Serge Ibaka  and Kendrick Perkins also made their presence known on defense, coming up with 3 blocks each, as they faced off with Spurs forward Tim Duncan.

The adjustments Scott Brooks made after Game Two certainly made a difference, but it was the energy and intensity that the Thunder brought on every possession that seemed to make the greatest difference.  Spurs Coach Gregg Popovich said, “I thought they played smarter than we did and harder than we did.”  The real test will be to maintain that level of play as the Thunder look to even the series 2-2 on Saturday night at 7:30 p.m. before going back to San Antonio for Game Five.