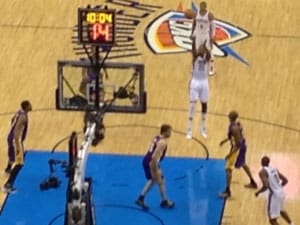 OKLAHOMA CITY – The Oklahoma City Thunder took control in the second half of Game Five to defeat the Los Angeles Lakers 106-90 on Monday night and advance to the Western Conference Finals against the San Antonio Spurs.

Coach Scott Brooks credited the teamwork and defensive effort for his team’s victory against Kobe Bryant’s Lakers.  While Bryant scored 42  of the Lakers’ 90 points by himself, the Thunder relied on a total team effort.  Russell Westbrook led the Thunder with 28 points and Kevin Durant followed with 25.  Durant added 10 rebounds for a double-double, and  James Harden contributed another 17 points to the total.  OKC’s big three also combined for 12 of the team’s 20 assists.

The Thunder big men made an impact on the game as well.  Serge Ibaka, Kendrick Perkins, and Nick Collison combined to block 6 six shots and grab 23 of the OKC’s 51 rebounds.  When the game got physical, the bigs did not shy away from the physical play, but neither did the Lakers.  Metta World Peace was called for a flagrant foul when he tried to prevent a Sefolosha fast break.  He and Kobe Bryant also received technical fouls for protesting the call, for a total of four Thunder points from the play.

The final score does not reflect how close the game was for much of the first three quarters.  The Thunder only had a three point lead going into halftime, and the game remained close for much of the third quarter.  In the final minutes of the third, with the game tied at 73, the Thunder started a 20-4 run that sent the Lakers home for the summer.

Durant and Westbrook hit shots when it mattered as they have throughout the postseason.  The intensity is certain to ratchet up a notch in the match up against the Spurs that everyone has been waiting for between two of the hottest teams in the NBA right now.  The only loss between these two teams in the postseason is the one the Thunder suffered in Game Three in Los Angeles.  Oklahoma City will head to San Antonio for a Sunday night showdown with the Spurs at 7:30 p.m. to begin the Western Conference Finals.