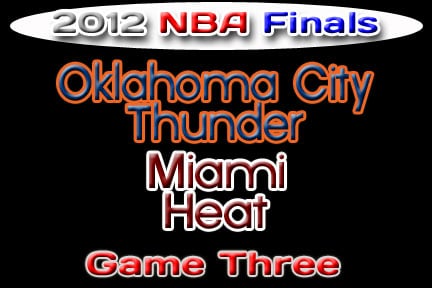 The Oklahoma City Thunder go down 2-1 in the NBA Finals on Sunday night after losing Game 3 to the Miami Heat 91-85.

One of the primary concerns for the Thunder was getting off to a better start than in Games 1 and 2.  Tonight the team went into halftime only down by one point, much better than the seven and eleven point deficits they faced in the previous two games.  OKC jumped out to 10-point lead in the third quarter, but two fouls on three-point shots quickly shifted the momentum, and Miami left the third quarter up 69-67.

The fourth quarter has been the setting for several late-game comebacks for the Thunder throughout the playoffs, and tonight, OKC almost did it again.  The same problem that the Thunder faced in Game 2 reared its head again Game 3.  Kevin Durant was called for his fifth foul in the fourth quarter, and he was forced to play less aggressively in the final minutes of the game.

Fouls and free throw have been big factors in the Finals, and that continued to be the case.  The Thunder, the best free-throw-shooting team in the regular season, shot 15-24 from the line, while Miami made 31 of 35.  A late blocking foul by James Harden put LeBron James at the line for the points that would effectively seal the win for the Heat.

For the Thunder, Kevin Durant scored 25 points, followed by Russell Westbrook with 19.  James Harden and Derek Fisher each contribued 9 points off the bench, and Kendrick Perkins had a double-double with 10 points and 12 rebounds.

With the Heat in control, the Thunder look to even up the series on Tuesday night in Game 4.