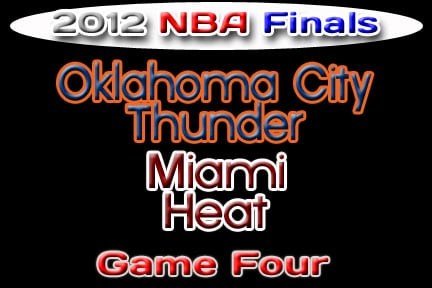 Oklahoma City started the game with great energy and effort to lead 33-19 at the end of the first quarter, but Miami charged back in the second quarter to trail by only 3 going into the half.  Miami took the lead in the third quarter, but the Thunder was in a position to do what they have done throughout the postseason by orchestrating a comeback.

After facing some harsh criticism for his performance in the past, Russell Westbrook was the biggest factor in the comeback effort, scoring 43 points on 20 of 32 shooting.  Kevin Durant added 28 points, and between the two, they scored the team’s last 32 points.  Serge Ibaka and Russell Westbrook each had 7 rebounds, and James Harden grabbed 10 boards himself.

LeBron James led the Heat with 26 points, but he left the game in the fourth quarter with cramps.  He was followed by Dwyane Wade and Mario Chalmers, who each had 25 points.  Lebron was one rebound shy of a triple-double with 26-12-9.

Now the Thunder face an elimination situation for the first time in this postseason.  Game 5 on Thursday night will be a must-win for the Thunder if they want to get back to OKC for a chance to do what no other team in NBA Finals history has done by coming back from a 3-1 deficit.