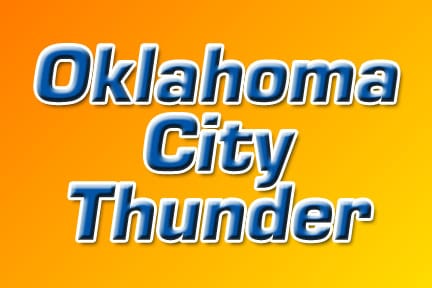 On Thursday, Kevin Durant was named to the All-NBA First Team, and Russell Westbrook was named to the All-NBA Second Team.  Durant won his third consecutive scoring title, becoming the youngest player ever to do so.  Durant averaged 28 points per game on 49.6% shooting during the 2011-2012 season.  Russell Westbrook was among the top five scorers during the regular season with an average of 23.6 points per game.  Both players, along with the Thunder coaching staff, also represented the Western Conference in the NBA All Star Game in February.

Serge Ibaka was also honored this week.  The NBA announced on Wednesday that Ibaka was elected to the NBA All-Defensive First Team by the association’s 30 head coaches.  Ibaka averaged 3.65 blocks per game, the best in the NBA, along with 7.5 rebounds per game.  He also finished in second place behind Tyson Chandler for the Defensive Player of the Year.

Earlier this month, James Harden was named the Sixth Man of the Year.  Coming off the bench, Harden averaged 16.8 points per game shooting 49.1% from the field.  He also shot well from long distance with 39% from three-point range.  Considered part of OKC”s big three, Harden helped lead the team to their 47-19 regular season record for second place in the Western Conference standings.

Durant, Westbrook, Ibaka, and Harden are all 23 years old or younger, which gives Thunder fans hope for a bright future in the years to come.  Now, OKC is preparing for their second consecutive appearance in the Western Conference Finals.  They will head south to face the San Antonio Spurs in Game 1 on Sunday night at 7:30 p.m.