Thunder rolls as Suns flame out in second half 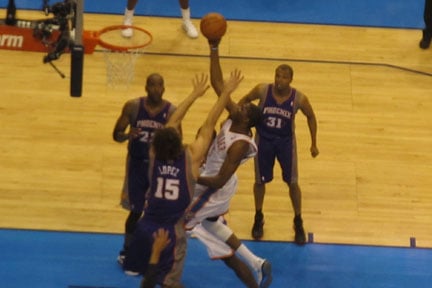 OKLAHOMA CITY – James Harden notched his first 30-point performance in the NBA, helping the Thunder to rally and defeat the Phoenix Suns, 115-104.  OKC moves its record to 31-8 and continues to lead the Western Conference

Oklahoma City got down early and its  offense struggled through most of the first half. A late 11-2 run fueled by nine Harden points got OKC to within six points at the intermission.

Phoenix built its advantage up to 16 points late in the third quarter, but the Thunder offense went on a 16-4 run to close out the period and trailed then by only four.

With nine minutes remaining, the Thunder finally regained the lead it had last owned following the game’s opening basket.  Durant’s driving layup put OKC on top 91-90, and the Thunder would not trail again.  Oklahoma City outscored Phoenix 31-16 in the final quarter.

Westbrook matched Gortat’s double-double as he doled out 10 assists with his game-high 31 points.

Serge Ibaka also had a double digits in two categories.  He had 18 points and 20 rebounds for OKC.

The Thunder stays at home for the next three games.  OKC hosts the Cleveland Cavaliers on Friday.