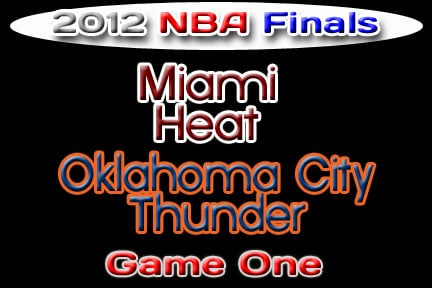 OKLAHOMA CITY – After waiting all season for this matchup, Tuesday night could not come quickly enough once the Miami Heat won the Eastern Conference Finals and set the stage for what promises to be an exciting Finals series between the Heat and the Oklahoma City Thunder.

Game 1 was just the kind of thriller that everyone was hoping for and just the kind OKC has been delivering all postseason.  It seems like the Thunder is making a habit of coming back from halftime deficits, and the team continued the trend in Game 1 of the NBA Finals.  The team showed poise after trailing by seven points at halftime to defeat the Heat at home, 105-94.

Miami jumped out to an early lead that had the Thunder down by as many as 13 points.  Shane Battier and Mario Chalmers combined to go 5-of-6 from three-point range to establish Miami’s lead.  Kevin Durant did what he could to keep OKC within striking distance early.  He scored 11 points in the first quarter while no one else on his team had more than three points in the opening 12 minutes.  Oklahoma City scored the final four points in the first half, and when they returned to the court to start the second half, they went on a 10-4 run.  Once the Thunder took its first lead of the game with 16 seconds left in the third quarter, the team never trailed again.

Russell Westbrook was instrumental in the third quarter rally that put the team ahead, scoring 12 of the team’s 27 points.  Westbrook finished the game just two rebounds shy of a triple-double in his NBA Finals debut with 11 assists and 8 rebounds.  Kevin Durant’s Finals debut was pretty good too.  The 23-year-old superstar led all scorers with 36 points, 8 rebounds, 4 assists, and a blocked shot.  Durant scored 17 of those 36 points in the fourth quarter to stave off a Heat comeback.

In the second half, Durant and Westbrook single-handedly outscored the entire Miami team 41-40.  Those numbers might make your think that no one else on the team contributed, but this was the kind of team win that has characterized Oklahoma City’s play throughout the playoffs.  Sefolosha was a huge factor on the defensive end, and Nick Collison went 4 of 5 from the field and grabbed 10 boards.  Serge Ibaka had 10 points and 6 rebounds himself that helped the Thunder to the victory.  Derek Fisher’s leadership on the court cannot be overestimated.  The veteran who is looking for his sixth championship hit timely shots and helped the team stay poised throughout the game.  The team only had 2 turnovers in the second half, and they won the battle for fastbreak points 24-4.

The Heat that had been so hot early cooled down in the second half thanks to the Thunder defense.  LeBron James and Dwyane Wade only had seven points each in the fourth quarter, and the Heat only 40 percent in the second half.

The Thunder now hold a 1-0 series lead, but Heat Coach Erik Spoelstra will undoubtedly make adjustments before the teams face each other again on Thursday night for Game 2 in Oklahoma City at 8 p.m.