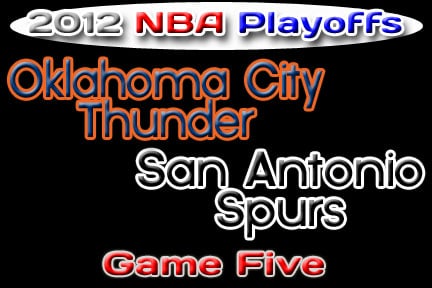 Going into the Western Conference Finals, the San Antonio Spurs were perfect in the postseason, and after Game 2, it did not look like the Thunder would be able to do much to change that. Three games later, OKC has turned the Spurs’ 20-game win streak into a three-game losing streak and got the first road win in either of the Conference Finals in their 108-103 victory Monday night.

From the start of the game, it was clear that this was going to be a physical game.  Only 44 seconds into the contest, Serge Ibaka was charged with his second foul and had to sit.  Nick Collison relieved the Thunder forward and went 3-3 from the floor for six points.  Defensively, he had a block and a steal and also took a charge.  It was not just Ibaka who was affected by the fouls.  Even after his substitution, six of the Spurs’ first eight points came from free throws.  By the end of the game, Kendrick Perkins, known for his physical play, had fouled out.

On the Spurs’ side, Coach Gregg Popovich decided to make a change and start Manu Ginobili in place of Danny Green.  Ginobili delivered, scoring 34 of the Spurs points and shooting 50 percent from three-point range.  When it came down to crunch time though, Ginobili missed the three-point attempt to give the Spurs a chance to win.  The Spurs guard also combined with Tony Parker for 10 of the Spurs’ 21 turnovers that resulted in 28 Oklahoma City points.

OKC’s big three were the ones doing most of the scoring.  Kevin Durant had 27 points, and Russell Westbrook added 23.  Off the bench, James Harden put up 20 points, including the three-pointer that deflated the AT&T Center with 28 seconds to give the Thunder a five point lead.  Another guy who really stepped up for the Thunder was Daequan Cook.  In only four minutes on the floor, Cook shot a perfect 3-3 for 8 points, including 2-2 from long distance.  Cook has not seen much playing time in the playoffs, but he delivered on Monday when Coach Scott Brooks called his name.

With the win, the Thunder improve to 3-2 in the series with a chance to close out the Spurs and advance to the NBA Finals when they return home on Wednesday night for Game 6 in Oklahoma City.