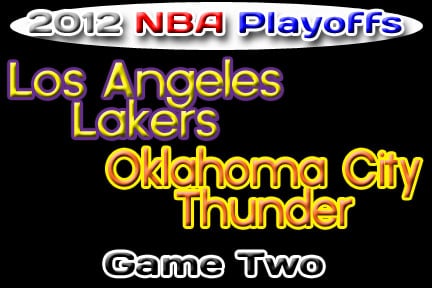 It took a tremendous effort to come back from a seven point deficit with two minutes left to play, but that is exactly what the Oklahoma City Thunder did to defeat the Los Angeles Lakers 77-75.  With the win, the Thunder improve to 2-0 in the series as they prepare to go west for the next two games.

After losing by 29 points on Monday night, the Lakers looked like a different team.  Their defense held the top-scoring team in the playoffs to only 77 points, but that was not enough to stop Kevin Durant, who led all scorers with 22 points.  He scored five of the team’s points in the 9-0 run to close the game, with James Harden contributing the other four.

Durant also got a steal off of an inbound pass from Kobe Bryant after a Harden layup that put the Thunder within five.  Durant took it down the court for an uncontested dunk, and then another turnover by the Lakers led to a second Harden layup.  Kobe then missed a three-pointer, and Durant’s baseline shot on the other end gave fan’s a dramatic roll before falling in the basket to put the Thunder up by one with 18 seconds to play.  Kobe could not get a shot off before Thabo Sefolosha took advantage of the foul the team had to give.  Then Steve Blake missed an open three-pointer.  From there, it was pretty much over.  Durant was fouled with 0.3 seconds left, and made the first free throw.  The league’s leading scorer apparently has trouble when he tries to miss free throws because he did not hit the rim.  The Lakers had one last prayer that ended with a Harden interception.

It was a physical game that is becoming characteristic of the meetings between these two teams.  Serge Ibaka had to go to the bench after getting his fourth foul, but he still had seven blocks in the game.  Sefolosha also had four fouls in the game for OKC, and Bryant, Gasol, and Hill all had four for the Lakers.  In such a physical contest, Thunder fans were relieved to see Kendrick Perkins in the game after he re-aggravated his hip injury in game 1 Monday night.

This was certainly not the best the Thunder have looked against the Lakers, but it was encouraging for fans to see them pull out a tough win even on a night when they struggled offensively.  The Thunder look to extend their postseason win streak to 7 in game 3 on Friday night in Los Angeles.