Thunder Storm Back in LA 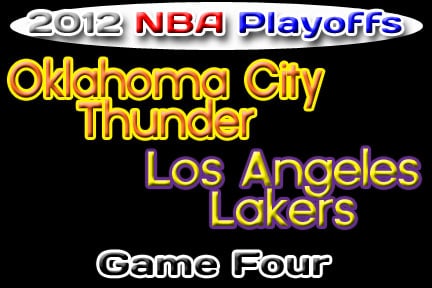 Game Four was looking a lot like Game Three, but the Thunder managed an incredible comeback against the Lakers to take their lead in the Western Conference Semifinals to 3-1. OKC’s big three led the late-game surge past the Los Angeles for the 103-100 victory.

Russell Westbrook was essential down the stretch, keeping the Thunder within striking distance with his 37 points.  With the team down seven, Westbrook drove to the basket to score and drew contact for the and-one that proved to be one of the major turning points in the game.

Kevin Durant missed two free throws that could have tied the game at 98, but he made it up for it in a big way.  He defined the term clutch with a huge steal and a go-ahead trey, leaving the Lakers with 13 seconds to make something happen.  Kobe Bryant missed a three to tie, and James Harden grabbed a rebound then made two big free throws to put the team up by five.  Durant finished the game with 31 points and 13 points for a double-double.

Serge Ibaka also made his mark on the game with 14 points and five blocks.  Kendrick Perkins fought it out with Pau Gasol and Andrew Bynum in the post and added another three blocks.  The team’s defense came up big in the final minutes to put the Thunder in a position to take the lead.

The series now returns to Oklahoma City for Game Five on Monday night at 8:30 where the Thunder will try to advance to the Western Conference Finals for the second year in a row.