Thunder Storm Back to Win the West 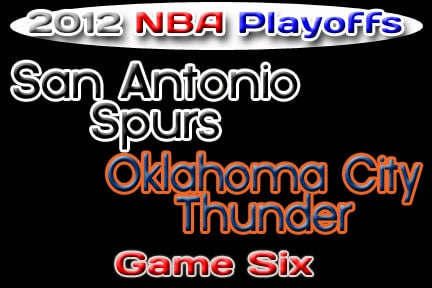 OKLAHOMA CITY – No one believed the San Antonio Spurs would go down without a fight, and they came out in Game 6 of the Western Conference Finals determined to keep their season alive.  After trailing by 15 at halftime, the Oklahoma City Thunder looked like a different team in the second half than the one who played the first 24 minutes. They held the Spurs to 36 points in the second half to get the 107-99 victory  and advance to their first ever NBA Finals as Western Conference Champions.

Gregg Popovich’s Spurs were raining threes on the Thunder in the first half.  They went 9-15 from long distance, including 4-4 by Stephen Jackson, for 27 of the Spurs’ 63 first half points.  Tony Parker, who had struggled in the previous three games against Thabo Sefolosha’s defense, scored 21 points by himself to help San Antonio outscore the Thunder 63-48 in the first half.

It was beginning to look like OKC would have to return to San Antonio for a Game 7, but everything changed in the third quarter.  Kevin Durant scored 14 of his 34 points in the third, including 2 three-pointers.  The Thunder outscored the Spurs 32-18 in the third to cut their deficit to one point going into the fourth.  OKC took the lead off of a James Harden layup with 9:31 left to play, and they never trailed again.

In the victory, Durant had a double-double with 34 points and 14 rebounds.  Russell Westbrook scored 25, in addition to his 8 rebounds and 5 assists.  Two other Thunder players scored in double-figures: James Harden put up 16 points, and Serge Ibaka went 4-8 for 10 points.  Derek Fisher also made a huge impact on the game, giving Parker fits on defense and adding 9 points of his own.  In all, it was a team win for the Thunder on Wednesday night.

After moving to Oklahoma City from Seattle in 2008, the Thunder went 23-59 their first season.  Only three years later they became just the third team in NBA history to win four straight games after going down 2-0 in the Conference Finals.  On their road to the NBA Finals this year, the team had to beat the Mavericks, the Lakers, and the Spurs, the only three teams to come out of the West in the past 13 seasons and winners of 10 of the past 13 NBA titles.

Now the Thunder must wait to see who they will face in the championship series.  The Boston Celtics and the Miami Heat will face off Thursday night in Game 6 of the Eastern Conference Finals in Boston where the Celtics will try to follow the Thunder’s lead.  Whoever they face, the Thunder will have home court advantage in the Finals, which begin in Chesapeake Energy Arena on Tuesday, June 12th at 8:00 p.m.