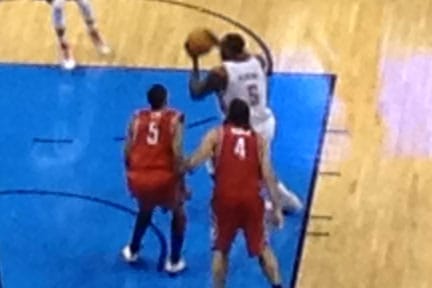 After losing only one home game during the first half of the season, the Thunder fell for the second time in less than a week at home against the Houston Rockets on Tuesday night.  After a late surge in the fourth quarter to gain a nine point lead, the Thunder lost in the final seconds with a final score of 104-103.

The Thunder were 2-1 against the Rockets in the previous three games they have played this season, but last night, a team without two of its starters played a little harder to steal one from the Thunder.  Scott Brooks said after the game, “We thought the game was in hand, but one things about Coach [Kevin] Mc[Hale]’s teams, they’re going to play.  They play every possession.  They were down men all season, and they keep fighting.  That’s what they do. That’s what we do.  Unfortunately, we didn’t execute down the strecth on both ends of the floor.”

For most of the night the teams had been trading baskets and occasionally the lead.  The score was tied at 53 at halftime.  After the third quarter, the Rockets led by four.  James Harden entered the game and ran the point for several possessions, allowing All-Stars Kevin Durant and Russell Westbrook to work off the ball.  This is when the Thunder went on their run to go up 11 with 2:29 left to play.

At the following timeout, the officials reviewed an earlier play and took back the two points from an Ibaka put-back.  Then the Rockets went to work, scoring 13 points in the remaining time.  The winning basket was a trey from Houston’s Courtney Lee with 15 seconds remaining on the clock.  The Thunder inbounded the ball, but KD missed his shot.  Ibaka grabbed the rebound, but could not get the final basket to win the game.

In a game where it is hard to find many positives, the Thunder’s big men can still be praised for their efforts on defense and offense.  Perkins had five assists to go with his four points and four rebounds, and Ibaka put up 12 points and eight rebounds.  Coming off the bench, Nick Collison went 2-3 from the field for four points and grabbed seven boards of his own.

Durant, Westbrook, and Harden all played their roles.  KD led all scorers with 28 points, and he also grabbed 12 rebounds for a double-double.  In the end, it was not enough for the Thunder to finish off the Rockets, but they look to continue their habit of bouncing back after losses Thursday night in Denver when they play the 24-19 Nuggets.