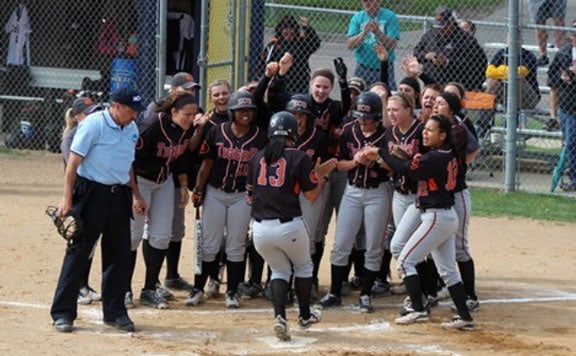 SIOUX FALLS, S.D. – The East Central University softball team came back in day two of the NCAA Division II Central Regional Finals with a 5-2 (8 innings) win over Winona State and a 4-1 victory over Central Oklahoma. The Tigers (34-15) will now get ready to face Augustana in the finals starting Sunday, May 10 at 10 a.m.

The wins were the first for any ECU program in the NCAA postseason, with just four chances so far between softball and women’s tennis.

ECU was led by a quintet of players who all hit .333 for the day. Senior Samantha McGraw led the team with two hits and four RBIs, while junior Jordynn VanPelt added two hits and three RBIs.

Junior Marissa Shaffer picked up the win in the first game and threw the first three innings of game two, allowing 14 hits and two runs and striking out five. Junior Lacey Paulk finished the second game and earned the victory while allowing three this and one run.

Game 1 – ECU 5, Winona State 2
ECU got on the scoreboard early, taking a 1-0 lead in the top of the first. Senior Taylor Davis led off the game with a single through the right side and was sent to second on a sacrifice bunt by junior Autumn Suydam. After the second out of the inning, McGraw singled to right center to send Davis home.

The Warriors (46-14) challenged to put a run across the board in the bottom of the first, with two singles, but the Tigers defense held strong and did not allow a run.

ECU then added a run in the top of the second. Senior Kaile Marcum started the inning with a single to second base and was sent to second on a sacrifice bunt by senior Kayci Snider. The next batter was sent back to the dugout, but senior Lacey Williams-Wenholm sent a ball to deep center field to score a run for a 2-0 advantage.

WSU was able to add a run in the bottom of the second to make it 2-1 in favor of ECU.

The game remained at 2-1 through the top of the seventh inning despite both teams having runners on base. However, the Warriors were able to tie the game at two in the bottom of the seventh to force extra innings.

The Tigers decided to take the game in their control again, with Davis walking and Suydam reaching on a bunt single. Junior Lauren Reeves then reached on a fielder’s choice that left runners on first and third. McGraw gave ECU a three-run lead with her second home run of the tournament to left field (5-2).

The Tigers allowed one base runner in the bottom of the eighth, but held on for the 5-2 win and moved on to face Central Oklahoma at 4:15 p.m.

Game 2 – ECU 4, UCO 1
The Tigers were the first to score, taking a 3-0 lead in the second inning. McGraw drew a leadoff walk and Marcum hit into a fielder’s choice that left both runners on base. After the second out of the inning, VanPelt hit her 14th home run of the season over the right field fence.

The Bronchos (41-20) were able to break onto the scoreboard in the bottom of the fifth with one run for a 4-1 ECU advantage.

But that was the last run to cross the plate as the Tigers defense held strong through the final innings for the 4-1 win to advance to the NCAA Division II Central Regional Finals against Augustana.