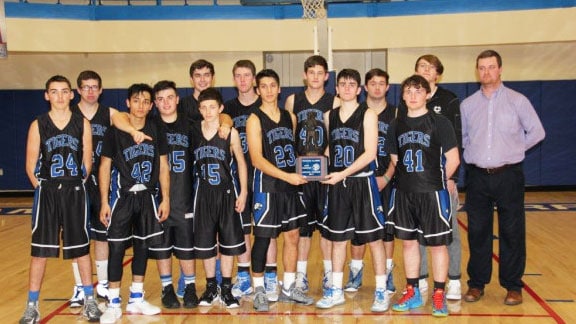 The Union City Tigers boys basketball team went into the third annual Hammon Tournament as the No. 2 seed. The Tigers returned junior Xaiver Morales and senior Blake Nelson and added senior Joey Lorenzen and junior Colby Combs for the second half of the season.

Union City came to play dominating their way throughout the tournament and taking home the championship trophy. The Tigers cruised past Fargo, Beaver and Lomega, with the lowest margin of victory being 17 points.

The second seeded Tigers took on the seventh seeded Fargo-Gage Bearcats. Union City got hot early knocking down 6 three pointers taking a 24-10 first quarter lead. The Tigers continued the hot streak dominating the first half and went to the locker room with a lead of 46-28. The rest of the game continued on the same path. Blake Nelson and Cash Everett led the team in scoring combining for 38 points. Union City won the game, 79-48, sending them to the semi-finals.

Union City took on Beaver in the semi-finals on Saturday. The three-pointer was there all night as the Tigers hit 12 of them.

Blake Nelson and Josh Michalicka hit four each and Cash Everett hit three. Landon Le also hit one. The Tigers controlled the game from the tip and played at their pace. Union City had four players score in double figures with Michalicka leading the way with 16 points, followed by Everett with 13, and Nelson and Le with 12 points each.

Union City cruised past the Dusters defeating them, 64-41, sending them to the championship game.

Union City took one last bus trip to Hammon to play in an unusual championship Monday. The Tigers had a second meeting with the Lomega Raiders.

UC hot once again from the three point line netting 11. With a combination of hot offense and tough defense, Union City started the game off with a 14-0 run and never looked back from there. The Tigers cruised to an easy 57-40 victory and were crowned the champions of the Warrior Classic. Cash Everett lead all scorers with 19.

Union City will be in action on Tuesday at Hydro following the girls game.

This story was originally posted at gouctigers.com and republished with permission.