Time is running out for Stillwater girls cross-country 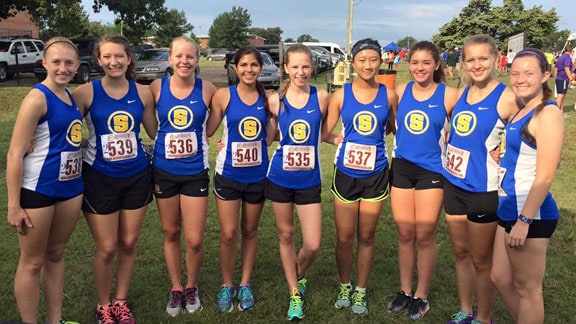 NORMAN – The clock is ticking.

The Stillwater High School girls’ cross-country team finished last with 266 points in the Central Oklahoma Athletic Conference Championship at the Norman Cross-Country Course in Norman on Tuesday, and its season is in jeopardy.

Norman High School won the team championship with 39 points, and Camille Henry won the individual championship, in 20 minutes, 14 seconds in the 5K.

This season, the girls’ cross-country team has struggled to improve at the rate needed to meet the program’s goal of qualifying for the state meet for the first time since 2002. The team showed signs of improvement at the Chili Pepper Festival in Fayetteville, Ark., on Oct. 3, for every girl ran her personal best.

However, senior Rachel Brown, who ran a 22:29 at the Chili Pepper Festival, said there is a lot of ground to cover.

“Coming from where we’ve been to where we are now is awesome, and I think that’s really encouraging; however, it still not quite where we need to be,” Brown said. “Remaining mentally tough and remembering that we came so far is great, but we need to keep pushing and keep making that same progress.”

The regional meet is next on the schedule for the Pioneers, and it will be the seniors’ last chance to qualify for the state meet.

There are two regions, East and West, and the top seven teams from each region advance to the state meet.

Regions will not be announced until later this week, but coach David Crynes said he believes Stillwater will be in the East Region.

Last season, the region hosted 15 teams, and the Pioneers finished 10th. Edmond Memorial, which placed fifth Tuesday, is the only team from the COAC that shared the region with Stillwater.

“This conference, outside of a couple of teams like Jenks and Owasso, this conference meet will be harder than our regional meet next week,” Crynes said. “The results today were frustrating, but they aren’t an indication of where we are in terms of regionals and qualifying for state.”

If the region doesn’t undergo any changes, eight of the teams will be ranked in the top 15 of Class 6A. That is bad news for Stillwater, for it is not ranked.

“We’re right there on the bubble; we definitely need to kick it in gear and get going to get those last few teams and get our spot,” senior Ella Luttbeg said. “We’re right there with them, we just need to step it up a tiny bit.”

Despite the adversity facing Stillwater, junior Elise Rackley, the Pioneers’ fastest runner, is optimistic about her team’s chances.

Rackley said it is important for her to run her best race at the regional meet because she doesn’t want Brown and Luttbeg to miss out on the feeling of qualifying for the state meet.

“For the team,” Rackley said. “That’s what we’ll be saying to each other.”

For the Stillwater girls’ cross-country team, it is simple. Place in the top seven at the regional meet or be forced into the offseason.

“I feel confident; I think that we’re definitely going to do it,” Rackley said. “We have nothing to lose, so we’re going to leave it all out there because this is it; this is the last chance.”