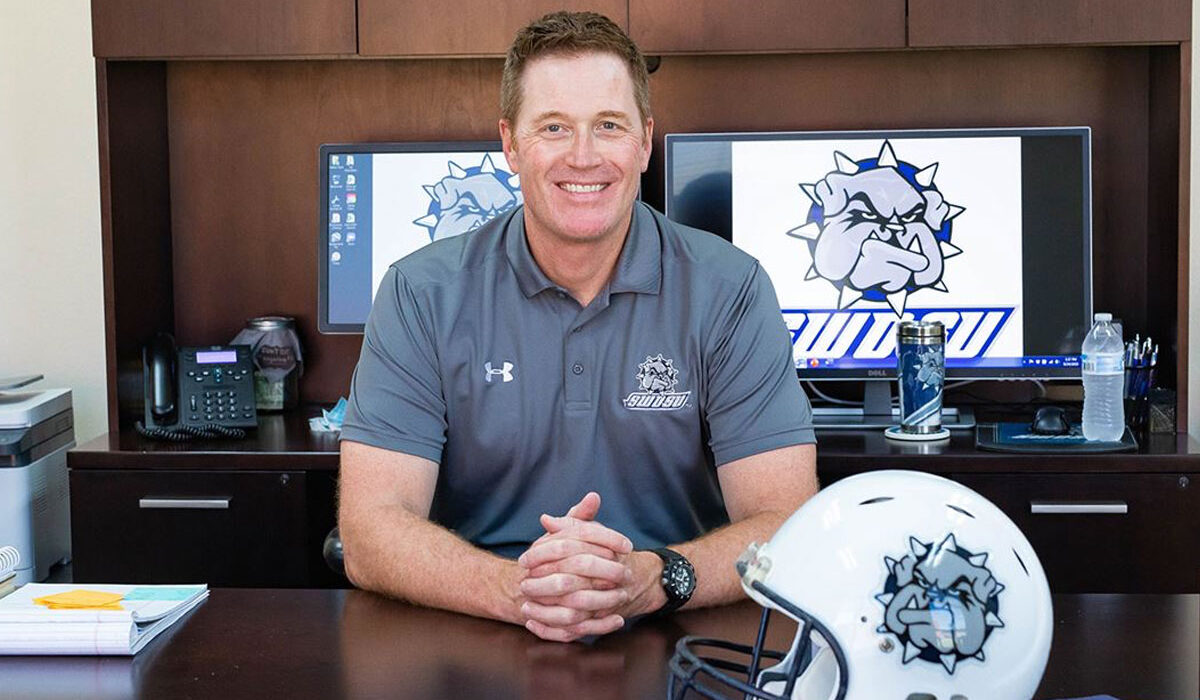 Helton has been serving as Interim Athletic Director since June of this year, and his appointment is effective immediately. He becomes the ninth full-time Athletic Director in SWOSU history, succeeding Todd Thurman, who held the position from 2008 until earlier this year.

“I am extremely pleased to name Todd as our Athletic Director,” said President Beutler. “Todd is a loyal Bulldog and has the support of so many alumni and friends of the university. I have complete confidence that he will continue to use his outstanding leadership abilities to guide our athletic program.”

Helton is the longest-tenured member of the SWOSU Athletic Department, having served 24 years as a football coach and seven years in athletic administration as Assistant/Associate Athletic Director and Compliance Coordinator.

“I consider it an honor to lead the Athletic Department at Southwestern Oklahoma State University and I want to thank President Beutler for his support and belief in me for this position,” Helton said. “During my career at SWOSU, I’ve had several great mentors who have helped prepare me for this opportunity and I’m excited to continue to guide our department. My staff and I will work hard to build upon the Bulldog tradition of excellence in student-athlete growth and development, championship caliber competition and community engagement.”

Since moving into athletics administration, Helton has been an active member on various NCAA committees. He currently serves on the NCAA Division II Football Regional Advisory Committee (RAC) for the Central Region in addition to being a member of the NCAA Eligibility Center Advisory Committee.

A Class of 2010 SWOSU Hall of Fame Inductee, Helton was a standout defensive lineman for the Bulldogs from 1986-89. He helped the Bulldogs to back-to-back winning seasons in his final two years and in 1989 he was named a First Team NAIA All-American.

After graduation, Helton joined the SWOSU Athletic Department headed by Cecil Perkins and coached football, serving under three different head coaches – Paul Sharp, Ryan Held and Dan Cocannouer – to provide a constant link between the past and present of the Bulldog Football program. He held the position of defensive coordinator from 2005-14 before stepping away from the sideline and into administration.

During a coaching career that spanned from 1990-2014, Helton helped the Bulldogs to four conference championships while coaching 10 All-Americans and countless all-conference selections. Helton was also on staff as the Bulldogs started a streak of three straight winning seasons, which included an appearance in the Aztec Bowl in 1991 and a trip to the NAIA National Playoffs in 1992 after they finished the regular season as the top-ranked team in the country.

The banner season for the SWOSU Football program followed in 1996 as the Bulldogs defeated Northwestern Oklahoma State (17-7) and Montana Tech (33-31) at Milam Stadium to claim the program’s lone NAIA National Championship. The 1996 season marked SWOSU’s last as an NAIA institution and Helton helped with the transition of SWOSU Athletics from NAIA to NCAA Division II.

In addition to his coaching duties, Helton served on various campus committees while he was a faculty member teaching in the Department of Kinesiology from 1993-2013.

A native of Perryton, Texas, Helton holds two degrees from SWOSU, earning his bachelor’s degree in Kinesiology in 1991 and a master’s degree in Education in 1993. He has two daughters, Kennedie and Ireland Helton.