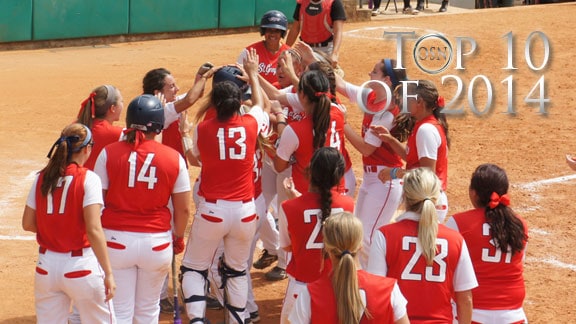 It is that time of year again – the time to look back on the year that was and reminisce. And to follow one of the unwritten laws of sports media sites and include a “Top 10” list.
That list starts tomorrow.
In the mean time, there are many moments again this year that warrant remembrance, but just didn’t make the top 10. Here are some of those honorable mentions in Oklahoma sports in 2014.

• Southern Nazarene is an active member of NCAA Division II

SNU is the first of a new wave of Oklahoma schools to take the leap from NAIA to NCAA to complete the three-year transition process. Already in 2014, the Crimson Storm has had representatives in the conference finals in both women’s soccer and volleyball. The wait for post season competition is over.

That the Stars were in the NAIA softball championship series was no surprise. OCU won 25 of its first 26 games and advanced to the series for the 23rd consecutive year (29th overall). In fact, the other nine schools in the event had a combined previous experience of 30 trips, compared to 28 for OCU. But the up-and-coming Cavaliers continuing their season into late May might have surprised. However, SGU’s postseason success was no fluke and the program is in a position to succeed for the foreseeable future. The Cavs won 20 straight in late February and through March. SGU’s appearance in the championship series was the second in three years and 6th overall. Both teams were buoyed by solid pitching and both (OCU 55-13, SGU 52-12) earned more than 50 wins on the year.

Winning 53 in a row of anything is impressive. Period. The streak started with a 3-0 sweep of OCU on Oct. 26, 2010, and was ended by Wayland Baptist on Oct. 10 of this year, and that match went the full five sets and a little further with a 16-14 score in the final set.

The Golden Hurricane fell to UCLA, 76-59, in the first round of the Big Dance, but finished the season at 21-13 and earned the trip to the Tournament for the first time since 2003. The season itself acted as a springboard for yet another solid TU coach to move to a bigger program, as this time it was Danny Manning taking the job at Wake Forest.

The Savage Storm won 45 games and were No. 2 in the nation most of 2013, but had tough luck in the postseason.  But they were not deterred.  SOSU came back in 2014 and won 45 games again, went back to the site of last season’s elimination (Mankato, Minn.), and promptly disposed of the host school and went on to win the regional.  The Storm then went 2-2 in the national tournament, finishing just out of the title game.

A 17-year tenure in Tahlequah concluded in 2014 for legendary coach, Larry Gipson. His record at NSU was 280-201 in his time and he coached the RiverHawks to a national championship in 2002-2003. He went out in style in his final home game as coach as the RiverHawks won a thriller when senior guard Bryton Hobbs hit a buzzer-beater to beat Pittsburg State, 61-60. NSU also upset eventual national champion Central Missouri in the MIAA quarterfinals in a run to the conference semis.

SWOSU athletic director Todd Thurman called the facility the “Jewel of Western Oklahoma” and the response to its opening has seemingly been positive on all fronts. It has played host not only to Bulldog basketball and volleyball, but also high school events and has served as an entertainment venue as well. On the official opening night for SWOSU on Jan. 25, the Bulldogs hosted rival NWOSU. The Lady Dawgs won 87-68, but the Rangers stunned the home crowd when T’aries Taylor hit a buzzer-beating three pointer, giving his team a 67-66 win.