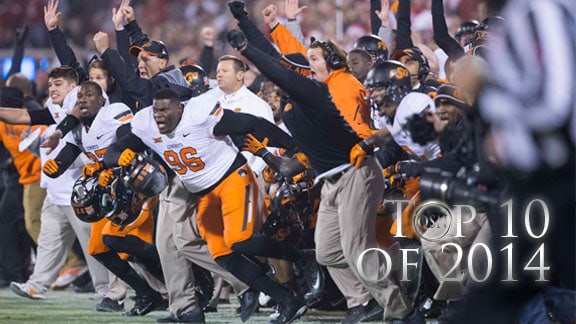 When Ben Grogan’s 21-yard field goal split the uprights in overtime, this was the call from the Voice of the Cowboys, Dave Hunziker.

And although the Bedlam win came on Dec. 6 – a full 19 days before most Christmas presents would be unwrapped – the 38-35 victory over Oklahoma probably felt like Christmas on the Cowboys’ sidelines.  It brought OSU’s record to 6-6 and made the team eligible to play in a bowl game and that could be considered a gift of sorts. 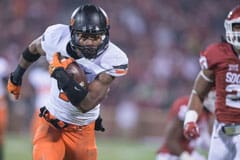 Freshman quarterback Mason Rudolph found Brandon Sheperd twice on the next possession.  One pass was completed for 14 yards and the next was a 43-yard strike for a touchdown with 4:54 left on the clock.  OSU trailed 35-28.

Then things got interesting.

The Cowboys defense held OU to another three-and-out, but the offense seemed to give the game away when the Sooners’ Zack Sanchez picked off Rudolph with 3:16 left.

Oklahoma State’s defense held again and forced another OU punt.  The Sooners got the punt away and OSU’s Tyreek Hill called for a fair catch on his own 15.  However, instead of giving the Cowboys the ball and poor field position with limited time, the Sooners elected to punt again.  And this time, Hill didn’t call for the fair catch.

In fact, Hill took the second punt back 92 yards for the game-tying score with 45 seconds left in regulation.

In overtime, the Sooners had the first possession and were forced to attempt a field goal.  Michael Hunnicutt’s 42-yard attempt went wide left.

On their possession, the Cowboys pushed the ball down inside the OU 4-yard-line and on a third down, Grogan’s 21-yarder was good for the win.

The overall story of the game and day had many twists and turns.

And it warrants noting OU’s Semaje Perine, who had 151 yards rushing and two touchdowns, was injured in the third quarter with the Sooners up by 14 and was not able to play out the game.  The momentum of the game shifted at that point.

The 38-35 score in the records, though, is the lede for the story and for 365 days Cowboy fans will celebrate one of the best rallies in Bedlam history.