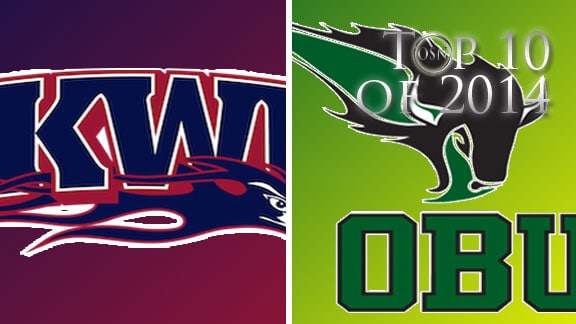 It was by far the best season in the history of the baseball program at Oklahoma Wesleyan.

A 29-game winning streak late in the season.

And the school’s first trip to the NAIA World Series.

OKWU coach Matt Parker said he knew his team had potential, but he didn’t foresee just how far or how high the Eagles would fly. 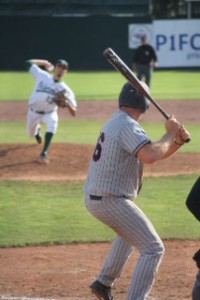 “It was a great season.” Parker said after the final game of the season, a 9-5 loss to Lewis-Clark State.  “When we started in August, we thought we had a chance to have a good team.  We knew we had good players returning and good leadership returning.  We felt we had really good players coming in.

“But to go 58-8 is unheard of.  To win 29 games in a row is unheard of.  To finish third in the country is something we couldn’t have predicted, but it certainly worked.  The way our guys went about their business, the way they played, it fun to watch and to be a part of.”

Likely the biggest baseball game of the season for the state of Oklahoma in 2014 was the game played the day before – and played in Idaho – when the Eagles ran up against the Bison.

Oklahoma Baptist was the top seed in the World Series and came in as the No. 1 team in the country.  The Bison had won the only previous meeting in 2014, 2-1.

This meeting would be won by just one run as well and nine innings wasn’t enough.

OKWU went up early 2-0, but OBU claimed the lead 3-2 by the fifth inning.  The Eagles stayed in it long enough to knot things up when Garret Easton brought in the game-tying run in the ninth.

In the top of the 11th inning, Will Price took one deep to right center, pushing in Cody Riley all the way from first.

Oklahoma Baptist (55-9) finished the year with a fourth place finish and also a school record in wins.

The Eagles took their season one step further, but the meeting between the two showed just how good the baseball played in the Sooner State really is.