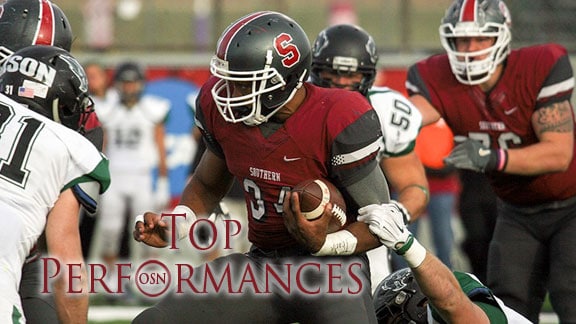 Here is a quick look at the Top 10 football performances throughout the state for November:

No. 10 – Dandre Hood, Bacone
Hood led the Warriors in receptions and receiving yards this season. He had his biggest day against Arizona Christian, with six catches for 154 yards, averaging 25.7 yards/reception, and hauled in a touchdown in the loss.

No. 9 – Irving Steele, senior, Northeastern State
Northeastern State’s season got better as it went along and Steele was a big part of that. The senior recorded 17 tackles on Senior Day in a loss to Washburn, and also grabbed a fumble recovery.

No. 8 – David Moore, junior, East Central
Moore’s touchdown reception in the fourth quarter at Southern Arkansas got the Tigers close, but the rally came up a bit short. Moore went on to rack up 201 yards receiving on 11 catches. The junior finished the year with 1,097 receiving yards, averaging 99.7 yards/game.

No. 7 – T.J. Eckert, junior, Central
Eckert started at quarterback the second half of the season and led the Bronchos to wins in six of their final seven games and a bid to the Live United Bowl. In his final regular season game, Eckert completed 31-of-41 passes for 410 yards and three touchdowns at perennial power Pittsburg State in a 49-31 win. He also ran for 44 yards and had a rushing touchdown, accounting for 454 yards of total offense.

No. 6 – Kenneth Martey, junior, Southwestern
Southwestern defeated rival Northwestern, 31-17, in the regular season finale to move to 8-3 on the year and set up a meeting with UCO in the Live United Bowl. The Bulldogs struck quickly and in record-setting fashion. Martey took the second play scrimmage 93 yards and in for the score – the longest rushing play in SWOSU history.

No. 5 – Craig Suits and Kolton Shindelar, sophomores, Tulsa
The Golden Hurricane came from behind to win the final game of the regular season and the defense scored the go-ahead and insurance points in the victory. Right after Zack Langer ran in a score to get TU to within three points midway through the fourth quarter, Craig Suits picked off a Tulane pass and ran it in from 28 yards out. It was followed by an 89-yard pick six by Kolton Shindelar, the second-longest interception return in school history. The win secured a .500 regular season for the Hurricane, who finished at 6-6.

No. 4 – Kent London, senior, Southeastern
London finished his career stopping big drives by rival East Central in the final quarter of the season finale. The senior picked off two passes in the end zone to stop the Tigers and helped Southeastern to a 37-27 win, clinching a winning season for the Storm at 6-5. The two interceptions by London capped a three-game stretch in which he picked off five passes.

No. 3 – Chris McClendon, senior, Oklahoma Panhandle
The final game for McClendon in an Aggie uniform ended with OPSU just one point short (a 48-47 loss to Tarleton State), but it doesn’t take away from what he has accomplished in his career, or even the game. It was fitting for the senior to cross the 200-yard plateau with 201 yards rushing and three rushing touchdowns. He ends the season with 1,277 yards rushing – averaging 7.4 yards per carry – and 15 rushing touchdowns.

No. 2 – Pick a Sooner, any Sooner
We’re going to go with junior Baker Mayfield, but it could be any one of a number of Sooners to warrant attention for a top performance this month. OU closed out November with a statement over OSU, 58-23, in Stillwater, with six different players scoring in the first half. Mayfield passed for only 180 yards on the rainy night and rushed for 77 more, but his signature moment of the game was a block of OSU’s Ashton Lampkin to spring Joe Mixon for a long TD run. After a stellar season, it was a move that may have secured a Heisman Trophy for Mayfield.

No. 1 – Terrance Olds, sophomore, Southern Nazarene
The streak is over! The losses in Bethany had been mounting for three years and the number had made it up to 32. It took 33 points and an overtime against Oklahoma Baptist to stop that streak and that’s what the Crimson Storm got on the final game of the season. Olds did his part with 160 yards rushing and the game-winning score in the extra period, a 25-yard touchdown run.