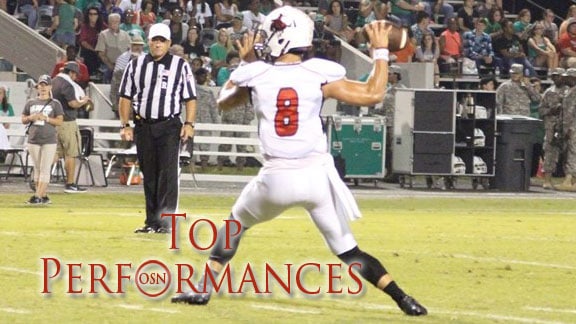 Here is the first installment for 2015 of the monthly look at the top 10 college football performances.

No. 10 – David Glidden, senior, Oklahoma State
It was an effective win for the Cowboys, 32-8, over Central Arkansas and the senior had a career-high for receiving yards with 145. They came with just four receptions, giving him an average of 36.3 yards per catch.  He took two of those receptions into the end zone for scores as well.

No. 9 – Ronnie Green, senior, Southeastern
The Savage Storm set a school record for rushing yards (421) in a win at Southern Nazarene, led by Green. He amassed 143 yards on just 10 rushes for an average of 14.3 yards per carry. Green also had a rushing touchdown.

No. 8 – Chris McClendon, senior, Oklahoma Panhandle
OPSU got its first win over Langston in nine years and McClendon had a big part in that. He rushed for a season-high 163 yards and two touchdowns. He also had 13 receiving yards and a punt return for 68 yards to give him 244 all-purpose yards on the day.

No. 7 – Jarion Tudman, junior, Northwestern
Tudman had the most single-game all-purpose yards of the month with 247 against Ouachita. The junior running back got his numbers though the air with five catches for 187 yards and a touchdown. His ground game wasn’t as good with four carries for (-4) yards, but he combined four punt and kickoff returns for 64 yards.

No. 6 – Dane Evans, junior, and Zack Langer, senior, Tulsa
The offensive performance of the Golden Hurricane against the Oklahoma defense in Norman seemed to be overlooked by the Sooners’ win and specifically what Baker Mayfield did (See No. 1). But Evans had a terrific day, completing 34 of 51 pass attempts for 427 yards and four touchdowns. And Langer ran for 161 yards and a TD, and had two catches for 20 yards as well.

No. 5 – Tre’von Jackson, freshman, East Central
The highest single-game rushing total of the month in the state came from a freshman in an effort that was by far his highest of his young career. Jackson took 23 carries for 182 yards in a Tiger win over Oklahoma Baptist, 41-20. He also had two receptions for 15 yards in the game.

No. 4 – Marc Evans, junior, Southwestern
The Bulldogs had back-to-back games scoring more than 50 points and Evans had a huge outing in the second one, a SWOSU win over Ouachita, 58-38. He completed 31-of-46 passes for 365 yards with four touchdowns and no interceptions.

No. 3 – Sheldon Augustine, senior, Langston
Augustine is a threat to score whenever or wherever he shows up on the field. The senior has caught 24 passes for 299 yards, averaging 16.6 yards per catch, with two receiving touchdowns. But Augustine has also made an impact on special teams. He took a punt return 52 yards for a touchdown and had a 100-yard kickoff return that was run coast to coast for a score as well in September.

No. 2 – Reid Miller, junior, Northwestern
Miller opened the season on a high note for Northwestern, leading the Rangers to a 52-31 come-from-behind win over Arkansas-Monticello. He was 33-for-45 passing for 379 yards and tossed five touchdowns. Miller also had 17 rushing yards on the evening.

No. 1 – Baker Mayfield, junior, Oklahoma
It’s tough to imagine anyone having a more productive day than what Mayfield had against Tulsa. He accounted for a school single-game record 572 yards of total offense on the way to OU’s 52-38 victory. Mayfield passed for 487 yards and rushed for 85. He had four passing touchdowns and two rushing touchdowns and became the first player in college football since 2000 to have at least three passing TDs and one rushing TD in each of his first three games.