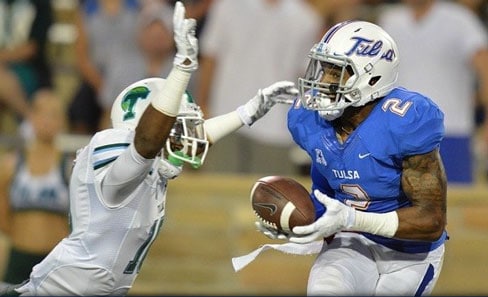 It’s Labor Day but it wasn’t much of a labor to find a top 10 football performances list with showings that were impressive in August.

Of course, there was only one weekend of football with which to work.

No. 10 – Blake Woodard, Oklahoma Baptist
Woodard started the evening and was one of three quarterbacks OBU used on Saturday in a 47-17 rout of Southwestern (Kan.) in the season opener.  He connected with Derek Serowski on the only Bison touchdown pass and also rushed for a touchdown.  Woodard compiled 225 yards of total offense on the night.

No. 8 – Emmanuel Ogbah, Oklahoma State
Ogbah made a name for himself on a national forum with his defensive efforts against the No. 1 team in the country.  His two sacks of the reigning Heisman Trophy winner were fierce and impressive.  Ogbah had six tackles on the night, including those two sacks which put Jamies Winston back 20 yards.

No. 7 David Chapman, Bacone
The Warriors were trailing Northwestern (Iowa) by 19 at the half, but forced two turnovers in the opening minutes of the third quarter.  Cue senior receiver David Chapman.  Chapman was the go-to guy on the first play after each turnover and took each reception in for the score and bringing his team back to within six early in the second half.  Chapman led BC with 83 yards receiving.

No. 6 – Keith Ford, Oklahoma
Ford opening the scoring for the Sooners on the day with a 22-yard touchdown run on the season’s first possession.  Ford scored again later in the quarter as OU started to put away Louisiana Tech.  Ford had 51 yards on the ground and 65 yards receiving in Oklahoma’s 48-16 home victory.

No. 5 – James Foote, Bacone
Foote had two interceptions and one fumble recovery in the Warriors’ big 41-33 victory over Northwestern (Iowa).   One interception was one the takeaways that Chapman responded to as mentioned earlier.  The first one he got on the day, he returned 29 yards for Bacone’s first score of the season.  Foote had 4.5 tackles on the day.

No. 4 – Dawson Myers, Oklahoma Baptist
Myers had a solid second half for the Bison as he helped his team build a lead it would not relinquish.  He had two touchdown carries in the third quarter and racked up 8.0 yards per carry on the evening.

No. 3 – Alex Ross, Oklahoma
Ross’ scores were also instrumental in extending an insurmountable lead for his team.  He had two short yardage touchdowns – one late in the second quarter and one early in the third – and had an 80-yard kickoff return on the afternoon.

No. 2 – Tyreek Hill, Oklahoma State
The junior speedster had quite an evening in his first game as a Cowboy, albeit in a tough loss to Florida State.  Hill led his team with six receptions and had eight carries for 44 yards.  He was a spark on special teams as well, picking up 140 yards on six kickoff returns and recorded 278 all-purpose yards on the night.

No. 1 – Keevan Lucas, Tulsa
The sophomore receiver found the spotlight to open the new season.  Lucas had 13 receptions for 233 yards and grabbed three touchdowns for the Golden Hurricane in the victory.  His first two opened the scoring for Tulsa in 2014 and the third was the game-tying score with less than three minutes remaining to extend the contest.  Lucas also had three carries for 36 yards and amassed 269 all-purpose yards.