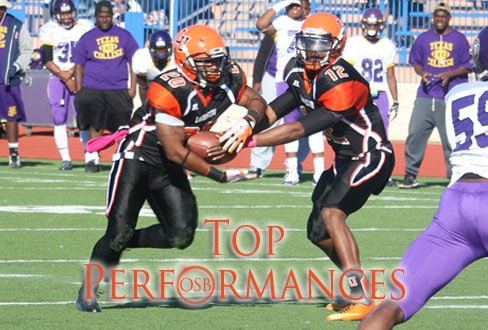 Let’s take one last look at the regular season for most schools – though I know there is still some Division I action to unfold.  Here are our outstanding performers and performances for November:

No. 10 – Kyle Kuban, Bacone
The Bacone/Langston matchup was one of the most highly anticipated games of the season and it lived up to its billing.  Langston built up a 33-10 advantage in the second half, but senior quarterback Kyle Kuban led the Warriors all the way back. Kuban led four TD drives, each of at least 60 yards, with two touchdown passes as Bacone took a 37-33 lead late in the game.  The Lions would ultimately win 39-37, but Kuban’s 395 yards passing and 14 carries for 29 yards were big in the Warriors’ comeback.  BC finished the season at 7-4.

No. 9 – Trey Watts, Tulsa
The senior carried his team to a win against Louisiana Tech, 24-14, and did so in big fashion.  Watts rushed for a career-high 189 yards and three touchdowns.  He had four receptions as well and put up 200-plus all-purpose yards for the third time this season.  The win snapped a four-game losing streak for the Golden Hurricane.

No. 8 – Caleb Holley, East Central
A big outing from Holley wasn’t quite enough to get the Tigers the win against Harding in their final home game, but the numbers were impressive, nonetheless.  The senior registered another day of 100-plus yards receiving in his last game at Norris Field; it was his fourth consecutive week to do that.  Holley had 125 yards receiving and three touchdowns.  He would go on to break ECU’s single-season receiving record the next weekend at SOSU.

No. 7 – Caleb Holbrook, Oklahoma Panhandle State
Holbrook was responsible for six touchdowns on the afternoon, as the Aggies beat down Oklahoma Baptist, 59-24.  The junior was 18 of 33 through the air, throwing for five TD passes with only two interceptions.  Holbrook also ran for 50 yards and crossed the goal line rushing, too.  His two touchdown passes on four-play drives at the end of the first quarter put OPSU up for good.

No. 6 – Brennan Clay, Oklahoma
Clay shouldered the load for the Sooners at Kansas State, helping his team to a 41-31 victory.  He carried the ball 31 times, amassing a career-high 200 yards.  He rushed for two touchdowns in the game that made coach Bob Stoops the winningest coach in Sooner history, with 157 victories.  Clay picked up 6.5 yards with each carry and his 3-yard touchdown run at the start of the fourth quarter proved to be the game winner.

No. 5 – Mark Wright, Jr., Langston
The Langston/Bacone matchup was so good that two top performances came out of it.  Langston’s freshman quarterback put on a show of his own, passing for two touchdowns and rushing for another.  Wright threw for 140 yards, but rushed for 115, gaining 5.8 yards per run.  He had a 30-yard pass to Cordara Frazier with 1:03 remaining to retake the lead for the Lions. Wright led his team to a six-game winning streak to close out the 2013 campaign, which accounts for the longest winning streak this season for small colleges in Oklahoma (D-II and NAIA).

No. 4 – Joshua Birmingham, Central
Birmingham picked up 130 yards rushing against Lincoln, but got them at the right time.  He scored four times rushing as his team picked up its first win of the season.  Birmingham finished his career as UCO’s all-time leader in touchdowns, points and all-purpose yards.  He is second on the Bronchos’ charts in rushing yards and receptions.  Birmingham also received the nod for first team honors on the All-MIAA team.

No. 3 – Clint Chelf, Oklahoma State
In front of the largest crowd ever to watch a game in Stillwater, Chelf went out and connected on his first 12 passes and 19 of 25 for the game with three touchdowns and no interceptions.  The Cowboys dismantled a Baylor defense that had been giving up less than 200 yards per game.  Chelf threw for 370 –  a career high, by the way.  He was named Big 12 Offensive Player of the Week, as well as the National Player of the Week by both Athlon Sports and the Walter Camp Football Foundation.

No. 2 – Javari Liggins and Jarion Tudman, Northwestern
Why not have two players in the No. 2 spot?  Especially since both players had four touchdowns in the same game.  The Rangers whipped Southern Nazarene, 62-17, and Liggins and Tudman each had four rushing touchdowns.  Tudman crossed the 100-yard mark with 143 rushing yards on the day (with TDs of 11, 3, 47 and 7 yards), while Liggins came close with 95 (and TDs of 15, 3, 9 and 5 yards).  NWOSU had a season-high 325 yards on the ground collectively.

No. 1 – Dustin Stenta, Southwestern
If turnabout is fair play, then the Bulldogs were just doing their part.  Southwestern took down Northwestern with an identical 62-17 score the week following the Rangers’ victory over the Crimson Storm.  Dustin Stenta had four touchdown passes in the win on the way to achieving SWOSU’s first winning season (6-5) in six years.  Stenta was 23 of 35 passing for 269 yards on the day and exactly 3,003 on the season, a Southwestern single season mark.  His 27 TD passes on the year is also a Bulldog single season record, and he amassed 10, 414 yards of total offense in his career.