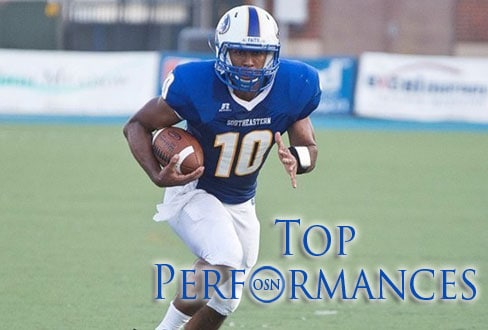 Here’s is October’s monthly installment of Top 10 football performances around the state:

No. 10 – Derrick Moore, Northeastern State
The future looks bright for the RiverHawks in the form of a redshirt freshman.  Derrick Moore recorded the team’s longest play from scrimmage this season with a 72-yard run for a touchdown against Nebraska-Kearney.  It was the first career TD for Moore and the carry was the longest run of the season by 56 yards for the RiverHawks.

No. 9 – Kevin Joseph, Southwestern
The junior cornerback earned GAC Player of the Week honors for his performance against the then-undefeated No. 2 Henderson State Reddies.  Joseph picked off two passes with returns of 49 and 60 yards.  The interception yards are the most in the league this season and set a single game record for the Dawgs.  It was the second game for multi-interception game for Joseph this year.

No. 8 – Lorenzo Alexander, Southern Nazarene
The Crimson Storm offense shows positive signs in a tight contest against Arkansas-Monticello, and Alexander led the way.  The freshman ran for 129 yards and three touchdowns on 28 carries in the 44-37 loss to the Boll Weevils.  It marked the first time in two seasons for SNU that a player had at least three rushing TDs.

No. 7 – Justin Browley, Bacone
Browley has three interceptions on the season – and they all came in the same game.  The junior also had five tackles for the Warriors in a 47-6 victory over Texas College.

No. 6 – Cole Weber, East Central
The junior linebacker didn’t have any tackles in the Tigers’ 66-7 victory over Northwestern, but he made his mark on the game.  He outscored the Rangers offense by himself – on special teams.  NWOSU was forced to punt in the first quarter from its own 36, but the punt was blocked by Lexus Jackson and recovered by Weber and taken in for a score.  He also recovered an ECU field goal attempt that was blocked in the Tigers’ end zone for another score.

No. 5 – Dawson Myers, Oklahoma Baptist
Myers had three touchdowns as OBU blowout Texas College , 62-0.  The junior had 117 yards on nine carries with TD runs of 5, 26 and 21 yards.  Myers has 12 rushing touchdowns this year and is averaging 7.4 per carry on the season.

No. 4 – Tyreek Hill, Oklahoma State
The state’s Division I schools had only three wins in October.  Oklahoma State salvaged a victory at Kansas on the quick feet of Tyreek Hill.  After the Jayhawks tied the game at 20 apiece in the fourth quarter, Hill took the ensuing kickoff 99 yards to give OSU the winning score.  The junior also had four receptions for 52 yards in the 27-20 win.

No. 3 – Ryan Polite, Southeastern
The Savage Storm swept through October with four straight wins.  Southeastern won big three times, but needed an epic comeback to win in Weatherford.  The Storm trailed 24-7 in the fourth, but scored 21 points in the final 13 minutes to win, 28-24.  Polite had three touchdown passes on the day and two in the fourth quarter rally.  He also went 5-of-5 passing during the Storm’s final drive, which was culminated by a 2-yard TD run by Ronnie Green with 40 seconds left.

No. 2 – Chris McClendon, Oklahoma Panhandle
The stellar season for the senior just keeps going and McClendon came up big again in October.  It was the second straight month in which he had 100-yard rushing totals in three of four contests.  McClendon tallied 466 yards rushing and 5 TDs and had 14 receptions for 171 yards and two receiving touchdowns.  His performance is a big reason for the Aggies’ record setting output on the scoreboard this season.  OPSU had scored 361 points (a new school record) while going 6-2.

No. 1 – Chas Stallard, Central
The sophomore is continuing to put up numbers and lead the Bronchos through the best season for the program in years.  Stallard had 158 yards rushing on 14 carries against Washburn, which is likely a school record for a QB, according to UCO sports information.  Stallard broke open for a 60-yard touchdown run in the fourth quarter to seal the 35-26 win over the Ichabods.  He passed for a TD against WU as well.