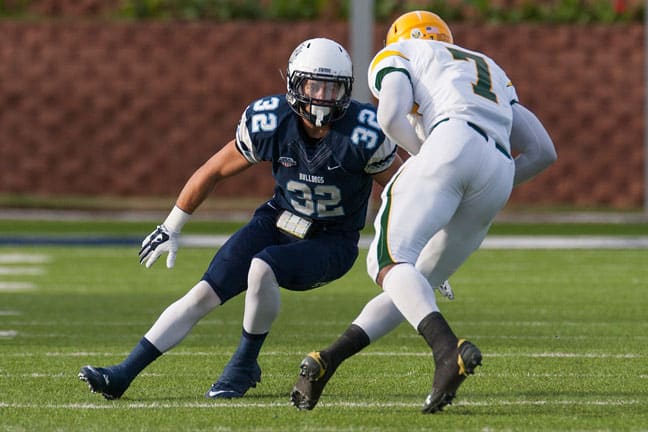 The first full month of football in Oklahoma has provided some memorable moments.  Here are the Top 10 of those performances.

No. 10 – Kevin Pantastico, Northeastern State
The wins haven’t added up yet, but the RiverHawks are getting closer.  NSU took Emporia to double overtime on the final Saturday of the month and Pantastico had his best outing yet since becoming the starter this season.  He completed 34 passes in 56 attempts, both school records.  Pantastico had 395 yards of total offense in 369 passing yards, with two TD passes, and 26 rushing yards, and another touchdown.

No. 9 – Ty Hooper, Northwestern
Hooper stepped in as a true freshman, and in his first start for the Rangers against Arkansas-Monticello, completed 77 percent of his passes.  The hometown product, Hooper led his team 75 yards for the game-winning touchdown in the final two minutes and was 3-for-3 passing during the drive.  It was the first NWOSU win this season.

No. 8 – Trey Tully, Oklahoma Baptist
The freshman picked up the CSFL Special Teams Player of the Week the first three times it was given this season.  Tully is 3-for-3 attempting field goals this season with a long of 39 yards and is 26-of-28 on PAT attempts.  He also has some punting duties with an average of 33.7 yards per punt.

No. 7 – Mark Wright, Langston
Langston opened the season again in 2014 with tough competition.  The Lions defeated Division II Lincoln, 49-48, at Arrowhead Stadium in Kansas City.  Although the LU fell behind by 21 points in the first half, Wright led his team back, throwing for 245 yards and three touchdowns.  He also rushed for 98 yards and a score in the come-from-behind victory.

No. 6 – Daxx Garman, Oklahoma State
Garman has assumed the starting QB role in Stillwater and had a great outing against Texas Tech in a 45-35 win.  In his first home start, he threw for 370 yards and four touchdowns.  Garman also had seven carries for 27 yards and another touchdown.  He was tabbed Big 12 Offensive Player of the Week.

No. 5 – Devlon Wortham, Southeastern
The sophomore started off the season with a bang again, as he did in 2013.  For the second consecutive year, Wortham opened the season with a 200-yard rushing performance against Southern Arkansas.  He picked up 228 yards on the 14 carries (17.8 yards per carry) and scored three times.  The Savage Storm came up just short to the Muleriders, falling 30-29 on the game’s final play.

No. 4 – Cody Jones, Central
The Bronchos started the season with three straight wins for the first time in 10 years and the defense has been standout in the victories.  Jones had two interceptions in an upset win over Missouri Western, picking up 83 yards after the picks and returning one for a score to seal the victory.  He also had an interception and eight tackles the following week as UCO defeated Emporia State.

No. 3 – Steven Townsley, Southwestern
Back-to-back weekends, the Bulldogs used fourth quarter comebacks to secure victories and Townsley was instrumental on defense in both.  Against Arkansas Tech, he returned an interception 63 yards to give SWOSU its first lead of the game, 27-23, with 5:11 remaining, which would be the final.  The next weekend, he scooped up a Southern Arkansas fumble and ran 49 yards and down to the 3-yard-line.  The Dawgs came back in that one to defeat SAU, 27-24.

No. 2 – Caleb Holbrook, Oklahoma Panhandle
Holbrook and the Aggies earned their first win of the season while handing Oklahoma Baptist its first loss.  OPSU recorded 683 yards of total offense and Holbrook throwing for 407 of that number. He completed 27-of-43 and tossed four touchdown passes on the day.

No. 1 – Semaje Perine, Oklahoma
The true freshman looked unstoppable against West Virginia.  Perine carried the ball 34 times for 242 yards, simply running over Mountaineers left and right.  He tallied four touchdowns on the night.  Although his longest gain was 38 yards, he averaged 7.1 yards per carry.  Perine earned Big 12 Offensive Player of the Week honors for his efforts.