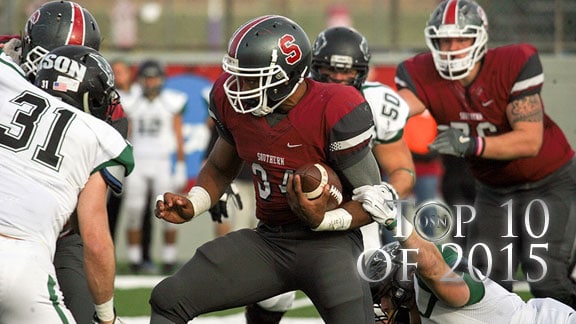 But the losing streak for Southern Nazarene is finally over. And appropriately enough, it took 33 points to keep the streak from reaching 33.

It has been a challenging run for the Crimson Storm making the transition to Division II, who carried a 22-game losing streak into 2015. And even after 10 losses on the year, they came out ready for a fight against a former Sooner Athletic Conference rival in Oklahoma Baptist. It is a rivalry that is budding in the Great American Conference, but the two programs had never met on the football field.

SNU got up early and was up 16-0 at the half. OBU answered with 20 points in the third and were up by four going into the fourth quarter.

James Mauro connected with Elden Coleman for a 29-yard touchdown pass on the Storm’s first drive in the fourth and regained the lead at 23-20. With less than two minutes left in regulation, OBU put together a nine-play drive that was capped by a Dez Stegall to Josh Pettijohn score from 26 yards out. With just 30 seconds left, this looked to be a game-winner. However, the extra point was missed, and the Bison led by just three, 26-23. There was still hope for the Crimson Storm and they used it.

An unsportsmanlike penalty let SNU start its possession at its own 40-yard line, following the kickoff. The Storm moved quickly and Mauro found John Martin for a 24-yard reception. A couple of plays later Carlos Anguiano connected on a 35-yard field goal as time expired and tied the game at 26-26.

In the overtime session, SNU got the ball first. On second and 10, Terrance Olds ran in a 25-yard touchdown and with the PAT, the Strom were on top, 33-26.

OBU answered with a touchdown, when Stegall rushed for the score from two yards out. But the Bison elected to go for two, and Stegall’s pass didn’t connect, leaving the final score at 33-32.

Olds had a game-high 160 yards rushing and the game-winning TD. Mauro passed for 234 yards and two touchdowns with no interceptions.

Heading in 2016, Andy Lambert takes the reins of the program as its new head coach. It’s a team that will go into the next year with a one-game winning streak.