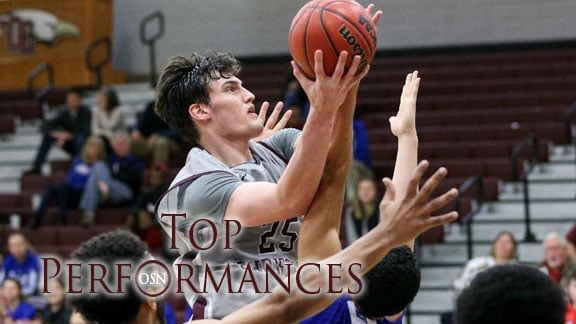 Oklahoma Christian's John Moon was 20-for-20 from the field in a 104-92 win over OPSU. Photo courtesy OC Sports Info.

It’s been a long and good season for men’s college basketball in Oklahoma, and the year is finally done. Here is a list of the Top 10 performers and performances of the 2015-2016 season.

Honorable Mention
It was just too tough to leave some performances off the list this year.
Southern Nazarene senior C.J. Rodriguez filled out his stat line with a night that included 31 points, eight assists, five rebounds, three steals and two blocks in a 93-87 win over Harding on Feb. 4.
Southwestern senior Martell Collins put up 25 points in a win over Southern Arkansas to close a run of seven 20-plus points games in eight outings. Collins had 22 of the 25 points in the second half, including the game-winning three-pointer in the closing seconds to give the Bulldogs the 71-69 victory.
And USAO senior Richard McCalop put on quite a display in Kansas City in March, but his scoring counted a little differently. He received a perfect score of 100 points in the final round and won the NABC-NAIA Shoot and Slam Dunk Contest during the festivities at the NAIA Tournament.

No. 10 – Sterling Thomas, East Central
The senior had 38 points for the Tigers, who came up just short at Texas A&M-Commerce on Dec. 14, falling 89-88. Thomas’ point total was the second highest mark in the GAC this season and he got there making nine three-pointers, the highest total in the conference this year.

No. 9 – Richard Shields, St. Gregory’s
Shields had a great night in one of his last games in Shawnee. The senior put up 41 points and brought down 11 rebounds and the Cavs needed all those points in a 96-93 win over Wayland Baptist on Feb. 20. The point total was the highest in the SAC on the year. And with the 41 points, Shields crossed the 1,000-point mark for his career at SGU.

No. 8 – Trey Sneed, Hillsdale
Sneed was named the NCCAA Player of the Year and earned the title with nights like the one he had against Manhattan Christian in an 84-81 win on Jan. 16. He came close to a triple-double with 31 points, 22 rebounds and seven blocked shots. Sneed went on to lead his team with 66 points and 26 boards in a three-wins-in-three-days stretch (earning the Tournament MVP honor) to help the Saints claim the NCCAA D-II national title.

No. 7 – Chandler Rickey, Oklahoma Baptist
The sophomore came as close as anyone in Oklahoma to getting a triple-double this season, missing it oddly enough with only nine points scored. Rickey added 16 rebounds and 10 blocks to his nine points in a 73-64 win over Manhattan Christian on Dec. 12.

No. 6 – Kashus Lyons, Hillsdale
The freshman showed the future is also bright for the Saints. He shot lights out in a 121-88 win at Baptist Bible college. Lyons not only had 41 points in the win, he did it shooting 83 percent from behind the arc, making 10 of 12 three-pointers.

No. 5 – Jawun Evans, Oklahoma State
Another team looking at a bright future with a star freshman this season is OSU. Although Evans had to miss the latter portion of the season with a shoulder injury, he made enough noise before that to make his presence known – specifically in the Bedlam game at Stillwater. Evans had 42 points, seven rebounds and six assists in a tough 74-72 loss to the Sooners. The points scored were the most by far by an OSU freshman (beating the previous mark of 29) and were the most put up by a Cowboy in a Bedlam contest (topping the former high of 37).

No. 4 – J.C. Hartzler and Donald Moore, Rogers State
It took double overtime and a lot of will, and the Hillcats pulled off the victory in the final game of the season, 97-94, at Dallas Baptist to claim the Heartland Conference regular season championship. Hartzler, a senior, closed out his time in a Hillcat uniform in style with a career-high 38 points, with 24 coming in the second half. While fellow senior Moore made his final shot, a three-pointer with 2.1 seconds left to give RSU the final margin of victory.

No. 3 – Buddy Hield, Oklahoma
It’s hard to pick just one moment as the best from the brilliant year that Hield had. Pick a game, almost any game, and you’ll find a top performance. For this list, let’s go with the epic and instant classic in Kansas on Jan. 4. No. 1 (AP Poll) Kansas defeated No. 1 (Coaches’ Poll) Oklahoma, 109-106, in triple overtime in Allen Fieldhouse. Hield, who was just named the Naismith Player of the Year in Division I men’s college basketball, had a massive night back in January scoring 46 points with eight rebounds and seven assists. And we can’t neglect what he did in the NCAA Tournament, with two of the highest outputs for the Sooners in their tournament history – 36 points against VCU and 37 points against Oregon.

No. 2 – Malcolm Mann, Mid-America Christian
It may not be possible to have a better ending to a season. With his team trailing, 99-98, with 4.2 seconds left in overtime of the national championship game, Mann drove the length of the court, collected the ball that nearly got away from him, put up a shot from just outside the lane, which went off the glass, the front of the rim and the back of the rim twice – and fell in – for the 100-99 win and the title. He had 25 points on the night, with seven in OT, and the final play is one that will be etched forever in the history of an already historic NAIA Tournament lore.

No. 1 – John Moon, Oklahoma Christian
20 shots attempted, 20 shots made.
Moon had a perfect night from the field and matched a national record for Division II basketball, a 20-for-20 mark had been accomplished only once before and that back in 1984. All of his shots came inside the arc for 40 points and he made 10-of-13 free throws as well to score 50 points on the night. He had eight rebounds, an assist, a steal and a block, too, in the 104-92 win over OPSU on Feb. 6. Moon was the only player in Oklahoma college basketball this season to hit the 50-point mark, and he set new OC and Heartland Conference records with the feat. His field goal percentage also set school and league records, and really, you just can’t shoot much better than 100 percent.