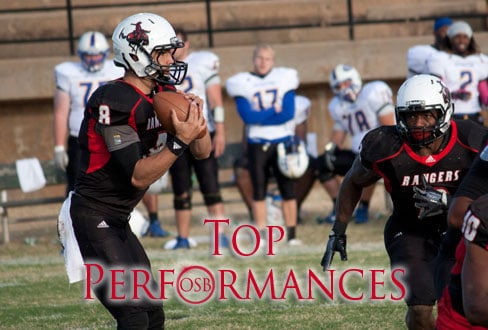 There were many memorable moments on football fields across the state and beyond in October.  We’ll take you back to remember some of the great performances during October.

Southwestern’s Terrance Franklin came up big in the Bulldogs’ victory in Durant over Southeastern.  The senior returned three kickoffs for 129 yards, including a 97-yard return for a touchdown that would knot up the game against the Savage Storm going into the intermission.  The TD return tied a GAC record and Franklin earned conference Special Teams Player of the Week honors for his work.

How do you earn your league’s Player of the Week honors if you make only one field goal and it isn’t a game-winner?
Possible answer:  It’s the kick that gave your team momentum. – That could be the case.  Austin Manger hit a field goal as time expired in the first half to give OBU a 10-0 lead over SAGU going into the intermission.  (The Bison ultimately fell to the Lions, 21-10)
Likely answer: It’s the first successful field goal attempt for your program in 73 years.  Manger booted a 33-yarder for the momentous occasion.

It was another statement game for the Sooners, when they took down Texas Tech, 38-30.  There were many stars on the day, including Saunders.  He led OU in receptions with six and took those for 153 yards.  Saunders also had scored twice in the second quarter with a 15-yard catch and a 76-yarder just two minutes later.

No. 7 – Keshaun Malone and Deantre Harlan, BC

Bacone went undefeated through the month of October (3-0) and has a four-game winning streak overall. The Warriors’ defense definitely made its presence known, giving up only 31 points and holding its opponents to single digits twice.  Against Texas College, Keshaun Malone helped the defense to score as well with an interception returned 47 yards for a touchdown.  Malone was named CSFL Defensive Player of the Week.  Deantre Harlan was a force as well with 3.5 sacks and six tackles overall.

Just like that first field goal, a first victory for a program in 73 years is really big.  And Fields had a huge day for the Bison as OBU took down Southwestern (Texas), 42-21, in the historic win.  The sophomore tailback picked up 151 yards on 19 carries and had three rushing scores.

The freshman is making a name for himself in Langston and the fans are excited that he will be around for awhile.  Wright saw limited action in the first two games of the season, but has since come to the forefront and led his team to a three-game winning streak against CSFL opponents.  Against Oklahoma Baptist, he completed 17 of 23 passes to eight different receivers and had a TD pass.  He also ran for 66 yards and a score in the Lions’ 41-17 win.

The Aggies went off for 45 unanswered points at Wayland Baptist to close a blowout win, and Holbrook led his team to compile more than 700 yards of total offense.  The junior quarterback was 32 of 51 passing with five touchdowns to only one interception.  He carried the ball for 49 yards and a touchdown as well.  He connected with 10 different receivers on the day.

The senior receiver earned GAC Offensive Player of the Week honors following a record-setting performance against Northwestern.  Holley rewrote the Tigers’ single-game receiving mark with 224 yards, and had actually taken down the previous mark before halftime.  His day included a 54-yard TD reception as well.

What a way to begin.  The junior rushed for 219 yards in his first start for the Cowboys.  Roland did this in 26 carries and scored four times along the way.  He earned the Big 12 conference honors as the Offensive Player of the Week on the strength of being the first league rusher to top the 200-yard mark in 2013.

The freshman QB has had an adventurous season, but the team’s efforts finally culminated in a win for the Rangers, a 25-21 victory against SOSU on Homecoming.  And Miller had a terrific day.  He completed 50 percent of his passes (13 of 26) for 164 yards, throwing for a touchdown as well.  Miller also showed up big in the ground game as the Rangers’ leading rusher with 121 yards on just seven carries.  His 65-yard TD run late in the third quarter proved to be the game winner for NWOSU.