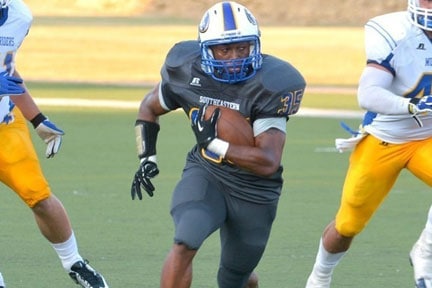 The calendar has turned and we take a look back at some impressive performances on the football field during the past month.  And although the teams in the state didn’t fare so well, some individuals shone in September.

No. 10 – Carl Salazar, Tulsa
The Golden Hurricane has one win on the season so far and it was due in no small part to the foot of Carl Salazar.  The junior from Broken Arrow was 3-for-3 on the night on field goals and 3-for-3 on PATs. The most important kick was a 34-yard FG as time expired to give Tulsa a 30-27 victory over Colorado State.  Salazar earned Conference USA Special Teams Player of the Week honors for his efforts.

No. 9 – Qumain Black, East Central
The defense showed up in a big way for ECU season opening win over Arkansas-Monticello and Qumain Black led the charge.  Black had two of the Tigers’ interceptions on the night, returning one for 58 yards setting up a touchdown and the other 80 yards and into the endzone to put the points on the board himself.  East Central won 46-22 and Black was named GAC Defensive Player of the Week.

No. 8 – Caleb Lavey, Oklahoma State
Another big defensive performance stands out for a team in its season opener.  OSU held Mississippi State to just three points in the Pokes’ 21-3 victory, led by linebacker Caleb Lavey with a game-high 11 tackles, two tackles for loss and a half sack.  Lavey was tabbed Big 12 Defensive Player of the Week.

No. 7 – Dustin Stenta, Southwestern
Dustin Stenta was steady in the Bulldogs’ 28-17 win over Arkansas Tech, which put Southwestern at 2-0 for the first time since 2007.  Stenta threw four touchdown passes to four different receivers and was not picked off on the night.  He also rushed for 70 yards on just seven carries, averaging 10 yards per carry.

No. 6 – Langston Jones, Northeastern State
Defense was the order of the day when NSU played Missouri Southern, as neither team scored in the second half.  Langston Jones led the way for the RiverHawks with a career-high 21 tackles, the first time an NSU player had hit the 20-tackle mark since Northeastern joined Division II.  Jones earned the MIAA Defensive Player of the Week honor, also a first as it marked the first time an NSU football player was tabbed for a weekly honor since joining the league.

No. 5 – David Chapman, Bacone
Chapman has taken the CSFL weekly honor for Offensive POW twice already in 2013.  The first time came after his performance in the Warriors season opener.  Bacone defeated McPherson, 37-31, in overtime and Chapman reeled in the game-winning 25-yard TD reception.  He had 180 yards receiving on the night.

No. 4 – Marquez Clark, Central
The junior receiver is making a name for himself in his first season on the field for the Bronchos.  Clark is the team leader in receptions, receiving yards and all-purpose yards for the year and definitely was against Emporia State when he brought in a school-record 13 receptions for 236 yards and had the second-most all-purpose yards in UCO history with 338 on the night.  More about this game later in the list.

No. 3 – Blake Bell, Oklahoma
Although he is best known for his ability to pick up yards on the ground, Bell showed his potential to throw the ball in the first start for the Sooners.  In a 51-20 win over Tulsa, Bell was 27-of-37 passing for 432 yards and tossed four touchdown passes.  He connected with 10 different receivers and his passing yardage total was the most for any OU quarterback making his first start.

No. 2 – Joshua Birmingham, Central
Birmingham had a modest 93 yards rushing and seven receptions for 44 yards through the air against Emporia State.  But he broke another UCO record in the process with his three rushing touchdowns.  The senior broke the 500-point mark and moved it to 518 (now at 524), most for any Broncho.  If you get a chance to see Central play this season, it would be worth it to see Birmingham in his final season.

No. 1 – Devlon Wortham, Southeastern
The redshirt freshman was second on the depth chart coming into the season, but made the most of his opportunity in the opener for SOSU.  Wortham racked up 220 yards on the ground and had three touchdowns, including a big 80-yard score to give SOSU its final points in a 56-50 upset of Southern Arkansas.  His total ranked eighth on the school’s single-game list.