Top 10 (plus) college football performances of 2016 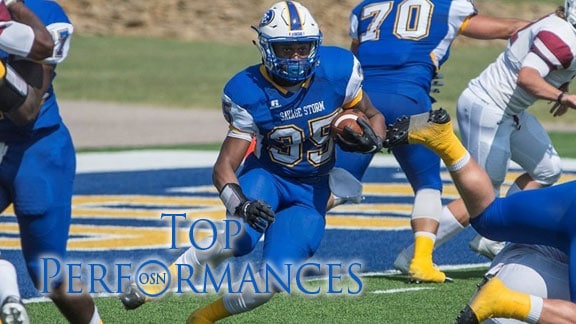 It’s always how quickly the college football season goes by. Let’s take another look at some of the great performances from the 2016 season:

No. 10 – D’Angelo Brewer, Tulsa
The Golden Hurricane had its best rushing output in eight years as Brewer had his number called over and over again in a double overtime win at Fresno State. The junior carried the ball 46 times and picked up 252 yards on the ground and TU won, 48-41. Brewer’s rushing total just edged the 249 teammate James Flanders amassed in a win over Memphis, in which he also scored five TDs.

No. 9 – Chas Stallard, Central
Stallard made the most of his first start of the season with a balanced offensive output and five touchdowns in a win over Missouri Southern. The junior completed 72 percent of his passes going 13-of-18 for 138 yards and threw four touchdown passes. He gained an almost equal amount on the ground with 21 carries for 136 yards and had a rushing TD as well. 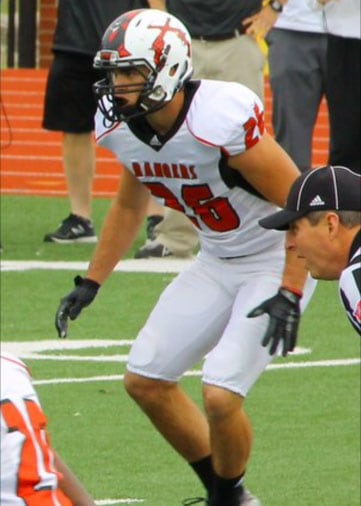 Nos. 8 – Shane Collins, Northwestern and Raheem Wilson, Southeastern
There are so many offensive performances on these lists, it’s important to remember the defense shines as well. So with No. 8 we recognize Shane Collins’ 21-tackle effort against Harding and Raheem Wilson’s two-interception afternoon against SWOSU, in which he also blocked an extra point attempt.

Nos. 7 – Isaiah Mallory, Oklahoma Baptist and David Moore, East Central
OBU and ECU played in the longest game in the state this season and the teams’ stars had a chance to shine. Tigers senior David Moore had nine receptions for 170 yards and scored three times, twice in the fourth quarter. Bison sophomore Isaiah Mallory rushed for 236 yards and two scores and helped the Bison to a 36-34 3OT win.

6. Dede Westbrook, Oklahoma
Westbrook showed up big-time in Dallas, as the Sooners kept the Longhorns at bay for a 45-40 win in the Red River Rivalry. The senior made a statement for some Heisman looks with 10 receptions on the afternoon, including a school-record seven in the first half. Westbrook recorded another OU record with 232 receiving yards and had three touchdowns, each of more than 40 yards.

5. Marc Evans and Collin Bricker, Southwestern
Oklahoma Baptist seemed to be on its way to another win until Southwestern completed a Hail Mary for a 37-35 victory at home. OBU took the lead at 35-31 with 15 seconds left on a Dez Stegall pass to Josh Pettijohn. But on the game’s final play, SWOSU senior quarterback Marc Evans got the final 41 passing yards of his 362 on the day, and his third TD pass, when fellow senior Collin Bricker was able to wrestle the ball away from the pack in the end zone for the score.

4. James Washington, Oklahoma State
Washington did his part to help his quarterback to a record-setting performance. The junior hauled in nine catches for 296 yards, more than half of teammate Mason Rudolph’s 540 passing yards on the day. He also found the end zone twice as the Cowboys came back from the loss-that-shouldn’t-have-been against Central Michigan, and beat Pittsburgh, 45-38, in Stillwater.

3. Shane Truelove, Oklahoma Panhandle
Truelove led the Aggies to their only Lone Star Conference win, a 54-44 victory over Texas-Permian Basin, by passing for 610 yards and four touchdowns with no interceptions. The senior also rushed for a touchdown on a day in which OPSU recorde 750 yards of total offense.

2. Devlon Wortham, Southeastern
With 195 yards on 20 carries, Wortham actually had the second highest rushing total for SE on the afternoon against NWOSU. (Ronnie Green picked up 220 yards on 19 carries.) But Wortham found the end zone six times, breaking a 94-year-old program record for rushing touchdowns. He also crossed the 3,000-yard plateau for his career and became the all-time rushing leader at Southeastern.

1. Reid Miller, Northwestern
You can make the choice on the performance from the senior who passed for 3,221 yards and a single-season school record 35 touchdowns on the year. It could be his 20-of-32 homecoming afternoon against ECU, in which he threw five touchdowns with no interceptions. Or the game in which he matched that feat with 25-of-37 for 323 yards against Southern Nazarene and again tossed five touchdowns and no interceptions.