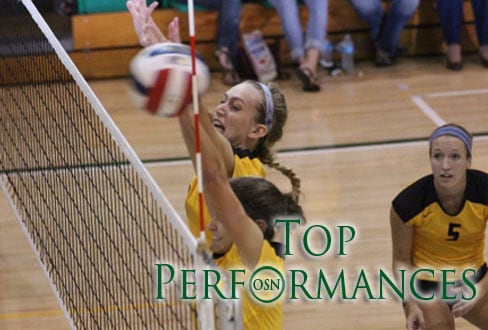 Into the month of October now, but here are the top 10 volleyball performances in Oklahoma in September.

No. 10 – Brandy Mader, Southwestern
The Lady Dawgs started the season slowly, going 0-4 in the tough Midwestern State Tournament early in the month.  But Mader turned heads dishing 93 assists through the weekend in 13 sets and was named to the all-tournament team.

No. 9 – Hilta Pereira, Oklahoma Wesleyan
The Lady Eagles won seven of their final eight games in September and one of the reasons for the success was Pereira.  The freshman came in midway through the month and has averaged 3.13 kills per set on the season.

No. 8 – Kierra Holst, Oklahoma
The junior was named Big 12 Player of the Week near the end of the month and played big in a five-set win over No. 23 Kansas.  Holst had 23 kills in the match, hitting .378, and had eight kills in the fourth set.

No. 7 – Bailey Clampitt, Tulsa
The senior recorded 36 assists in a sweep over Milwaukee.  Clampitt is averaging 9.43 assists per set and leading the Golden Hurricane with 24 service aces and serving at a .945 clip.

No. 6 – Kristen Macy, Oklahoma City
The sophomore from Edmond is averaging 3.8 kills per set for the 12-8 Stars.  Macy is also second on her team in service aces (.3) and in the top 20 in the Sooner Athletic Conference.

No. 5 – Taylor Jacobs, Southern Nazarene
As of this post, Jacobs has crossed 200 kills on the season and is averaging 3.56 kills per set, helping her team to a 12-4 record on the year so far.  She is also solid on defense with 1.28 blocks per set to complement the offense.  Jacobs leads the GAC in both categories and was named the league’s Offensive Player of the Week twice in September.  She also recorded her 1,000th kill in the month.

No. 4 – Lucija Bojanjac, Oral Roberts
Through the month of September, Bojanjac has recorded a 10.57 assist per set average on the season.  She is also averaging more than two digs per sets as well.  The freshman from Croatia started off her career well with a double-double (24 assists, 10 digs) against Nevada in ORU’s opener.

No. 3 – Alissa Benson, Southeastern
The freshman is making her presence known in the GAC and is the only freshman in the top 11 in the league in assists per set at 8.13.  Benson, also from Edmond, was named Player of the Week for her efforts in her first collegiate tournament.  She averaged 12.07 assists per set at the Henderson State Classic and dished out at least 40 twice – 43 in a sweep against Union and 54 in a four-set contest with Fort Hays State.

No. 2 – Asia Pipkin, Northwestern
NWOSU is one of the hottest teams in the state right now and with a 10-5 record has already doubled its win total from 2013.  And Pipkin is leading the way for the Rangers.  She dominated against Henderson State with 22 kills and no errors in a four set win over the Reddies.  Good enough for a school record.  Pipkin had a .458 hitting percentage and 12 digs on the day as well.

No. 1 – Oklahoma Baptist Lady Bison
On Sept. 23, OBU notched its 50th consecutive Sooner Athletic Conference victory with a 3-1 win over Oklahoma City.  50th consecutive win!  That’s a ridiculous number.  OCU’s third set win stopped a streak of 23 straight consecutive sets taken by the Lady Bison.  Senior Valerie Stetzer won SAC Libero of the Week twice in the month.  The last time OBU lost an SAC match was on Oct. 23, 2010.  The win streak is up to 52 as of this post.  That’s not only consistency, that’s is consistently good.