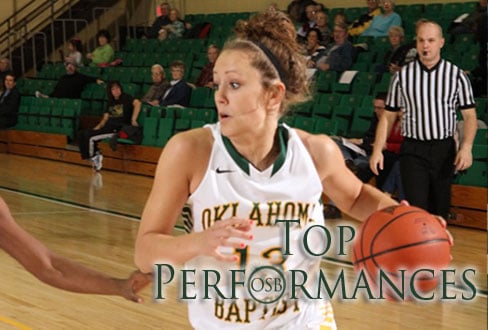 Weather issues cost schools many games, but there were still good performances in the final month of 2013.

No. 10 – Southwestern Lady Dawgs
For the second month in a row, the entire SWOSU team makes the list.  The Lady Dawgs put up 114 points against Oklahoma Panhandle State in the only game they played in the month, all the way back to Dec. 2.  Seven players scored in double figures.  SWOSU shot better than 52 percent from the floor and made 15 three-pointers.  Sarina Sayama went 5 of 6 from behind the arc and had a game high 18 points.
Additionally, all 13 players that took the court for OPSU scored.

No. 9 – Chelsey Beathard, Northeastern State
The RiverHawks capped a four-game winning streak with a victory at Lincoln.  Beathard led the way for her team with 17 points on the strength of shooting 4 of 5 from long range.  She had three assists on the night and is the team leader for the season.

No. 8 – Charity Fowler, Oklahoma Baptist
Ice postponed the opening game of the Sooner Athletic Conference portion of the OBU slate, so the only games the Lady Bison played in December were in Fort Lauderdale, Fla.  OBU split the two games in the Cruzin Classic, Fowler’s performance was good enough to earn her SAC Player of the Week honors.  She averaged 15.5 points and 5.5 rebounds and perfect from the free throw line in seven attempts.

No. 7 – Nicole Kornet, Oklahoma
The sophomore had a game high 26 points as the Sooners blew out Maryland-Eastern Shore.  Kornet went 5 of 5 inside the arc and made 3 of 6 outside it.  She also made 7 of 8 free throws and had seven boards and six steals.

No. 6 – Jill Bryan, Central
The Bronchos opened the tough MIAA schedule in December and went 2-2.  Bryan averaged 15.5 points in the two victories fro UCO.  She went 5 of 11 from long range and was a perfect 10 of 10 at the free throw line.

No. 5 – Tori Huff, St. Gregory’s
The Cavaliers have struggled this season so far, but picked up a big win over Bacone last month.  Huff came up big for SGU in the 101-96 overtime victory, scoring 35 points behind 8 of 13 shooting behind the arc.  She also had seven rebounds, two assists and three steals.

No. 4 – DaNara Day, Rogers State
The women’s basketball scoring record has been upped three times this season already for the Hillcats.  Day became the most recent to do it.  Her 36 points in Bartlesville fueled RSU to a big win over Oklahoma Wesleyan.  She shot 67 percent from the field and was 5 of 8 with her three-pointers.

No. 3 – Aminata Fall, Southern Nazarene
The Crimson Storm were able to get in only two games in the month and won both.  Fall continued to play strongly as she averaged 22.5 points, 13.5 rebounds and 3.5 blocks in the victories.

No. 2 – Tamiya Green, Bacone
The Lady Warriors have a player in Green.  She notched a double-double in four out of five games for Bacone in December.  Green averaged 15.2 points and 12.6 rebounds for the month and had 19 and 13 in BC’s win over Texas College.

No. 1 – Tiffany Bias, Liz Donohoe and Brittney Martin, Oklahoma State
We started this month’s list with a team effort and will end it that way.  Bias, Donohoe and Martin each earned Big 12 Player of the Week honors for the Cowgirls in December.  OSU is ranked No. 11 and finished 2013 at 11-0.  Each of these three has had a team high in scoring at least once and Donohoe and Martin have logged double-doubles as well.
Top 10 MBB Performances in Dec. 2013