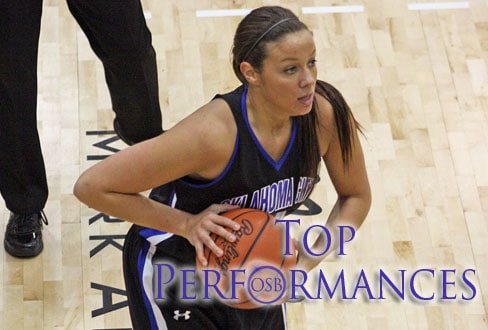 It’s midseason on the schedule and many players and teams have hit their midseason stride.  It was tough this month to narrow down the top performances to just 10.  Here’s our attempt.

No. 10 – April Williams and Maclayn Massey, Mid-America Christian
The Lady Evangels needed to right the ship after five consecutive losses in the middle of the month.  They got two big wins to finish January, including an 86-60 victory over USAO.  MACU opened it up in the second half, scoring the first 20 points and tallying 52 in the period.  April Williams put up a double-double with 22 points (a career high) and 10 rebounds.  Maclayn Massey also had a career high 20 points.

No. 9 – Dorottya Balla, Oral Roberts
ORU had lost nine straight coming into 2014, but made it through January with a 4-4 record.  The Golden Eagles got the month started with an 85-73 win over Houston Baptist to start the Southland Conference portion of the schedule.  Dorottya Balla, a freshman from Hungary, is averaging 9.9 points on the season, but blew up for 30 to lead her team to a win that got more winning started.

No. 8 – Carrington Fox, Northeastern State
The senior for NSU played in 101st game Wednesday night.  Fox had a block party against Nebraska-Kearney earlier in the month, tying a school record with a career high eight blocks against the Lopers.  She came close to a triple-double, adding to the eight swats, nine points and 11 rebounds.  To round out the all-around game, she dished out five assists as well, and all this in just 30 minutes of court time.  NSU won 64-61.

No. 7 – Lynette Holmes, Langston
Holmes averaged 32.5 points per game in the four games she played for the Lady Lions in January, before succumbing to a knee injury in a win over Bacone.  Langston went 3-1 during that stretch, which included a 35-point game against Wiley.  Holmes is leading the NAIA in scoring for the season at 26.73 ppg.

No. 6 – Northwestern Rangers
NWOSU opened up the season at 0-9.  Then the calendar turned.  The Rangers are 5-3 in January and all games have been conference victories.  Northwestern closed the month winning four of five and had an exciting overtime win over Henderson State.  Kamera Bozeman is averaging 13.1 points during this time and NWOSU has gone from last place to a tie for sixth in the GAC.

No. 5 – Ashley Clark, Tulsa
In seven games in January, Clark has scored in double figures in each, notching 20 points in three of them.  She had a double-double with 14 points and 12 boards in a win over Marshall.  The Golden Hurricane has gone 5-2 during the month.

No. 4 – Sarah Johnson, Oklahoma Panhandle State
The Aggies have one win this season.  OPSU beat Arkansas-Fort Smith, 71-65, and Sarah Johnson did her part to assure the team’s victory scoring 38 points, more than 50 percent of her team’s total.  Half of that came from the free throw line as Johnson was sent to the line 22 times in a physical game and she made 19.

No. 3 – Jalissa Council, Oklahoma Baptist
Council was named Sooner Athletic Conference Player of the Week twice and NAIA National Player of the Week as well in January.  She averaged 21.3 points and 6.9 rebounds per contest in seven games.  Council put up 31 points in OBU’s win over then-No. 3 Oklahoma City, which stopped a 35-game regular season conference win streak for the Stars.

No. 2 – Sarina Sayama, Southwestern
The Lady Dawgs played their first game in their new home and grabbed an 87-68 victory over rival Northwestern with Sayama playing a key role in the win.  The senior hit eight three-pointers, four in five trips at point, and put up 26 points for the game.  This might have been in the top spot in another month, but…

No. 1 – Cara Pugh, Kayla MacKenzie and Yvonte Neal, Oklahoma City
But the Oklahoma City Stars one-upped it with more than one player lighting it up from behind the arc.  OCU senior Cara Pugh connected on eight three-pointers on the evening, while fellow senior Kayla MacKenzie put in seven of her own.  Factor in the five long-range makes from junior Yvonte Neal and that accounts for 20 made three-pointers (a school record) on the night for the Stars, who blew out Texas Wesleyan, 96-61.