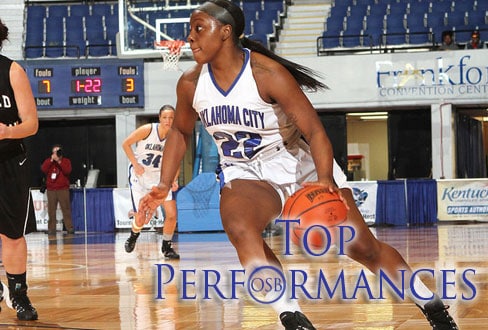 We closed out the 2013-2014 with some fantastic performances by players from Oklahoma schools.  Here’s another look at the final month of the season.

No. 10 – Fontana Tate, Northeastern State
The RiverHawks ended the regular season with six straight losses, but had done enough to make it into the MIAA tournament.  And NSU earned one more win for 2014.  Northeastern State defeated Northwestern Missouri, 47-42, and Tate led the way with 18 points and seven rebounds.

No. 9 – Lauren McKinney, Mid-America Christian
The Lady Evangels made it to the championship of the NCCAA Central Region, falling there to Oklahoma Christian.  McKinney had a double-double in both games in the postseason and averaged 17 points and 11 rebounds in the tournament.  The senior finished the year leading the team in rebounds, steals and was third in scoring.

No. 8 – Ashley Robison, East Central
The Lady Tigers earned the No. 2 seed in the GAC tournament and won their first round game for the second consecutive year.  Robison led the way with a double-double consisting of 24 points and 10 boards and went 5-of-9 from behind the arc.  She closed out the season second in scoring, rebounding and assists while leading ECU in steals.

No. 7 – Oklahoma Christian Lady Eagles
The Lady Eagles went 19-12 overall, but had a fantastic March, going 5-1 in the month.  OC opened the month winning its final regular season game over OPSU.  The Lady Eagles then won both NCCAA central region contests at home (OC was 12-1 at home this season) and took the title with a win over MACU.  And although the OC lost the first game in the NCCAA national tournament, the Lady Eagles won two more to finish fifth and end the season on a high note with a win.

No. 6 – Kayla MacKenzie, Oklahoma City
The Stars won five straight in Frankfort, Ky., to take the NAIA national title and MacKenzie was named the tournament’s MVP for her efforts in that stretch.  She averaged 13.6 points, 6.2 rebounds and 5.0 assists per game during the week.

No. 5 – Alex Adekunle, Langston
The senior had two double-doubles in three games for the Lady Lions in the RRAC tournament, in which they finished as runners-up.  Adekunle averaged 22.0 points and 10.3 rebounds in that span and had 31 points in a big win over Wiley that may have clinched an at-large bid to the NAIA tournament for LU.

No. 4 – Charity Fowler, Oklahoma Baptist
Fowler was named the SAC tournament MVP as she helped the Lady Bison to their first league tournament championship.  She had two double-doubles and averaged 22.7 points, 9.3 boards and 4.7 assists.  Fowler exposed for 32 points, avenging a loss to Wayland Baptist, the team that gave OBU its first SAC loss this season.

No. 3 – Michelle Fisher, Southwestern
SWOSU won its second GAC tournament title in three years, but the third seeded Lady Dawgs had to come from behind against the top seed in the championship game to get there.  Southwestern trailed the No. 2 team in the country, Harding, 68-55 with less than nine minutes left when Fisher stepped up and rallied her team.  She had 19 points, including the game-winning layup and was tabbed the tournament’s MVP.

No. 2 – Brittney Martin, Oklahoma State
OSU made it to the Sweet Sixteen by defeating Purdue, 73-66, in what was basically a home game for the Boilermakers.  Martin did more than just keep her team around when Tiffany Bias went down not long after halftime.  She exploded for 20 points and 20 rebounds and the Cowgirls kept a double digit lead over Purdue through most of the second half.

No. 1 – Yvonte Neal, Oklahoma City
Neal scored 36 points in the championship game to lead her team to another title.  It’s the second in three years for OCU and seventh overall.  Neal averaged 19.4 points and 5.0 rebounds through the five games of the NAIA national tournament.  Neal accounted for 45 percent of her teams’ scoring, shot 46 percent from the field and recorded nine of her team’s final 11 points and the game winner in the victory.