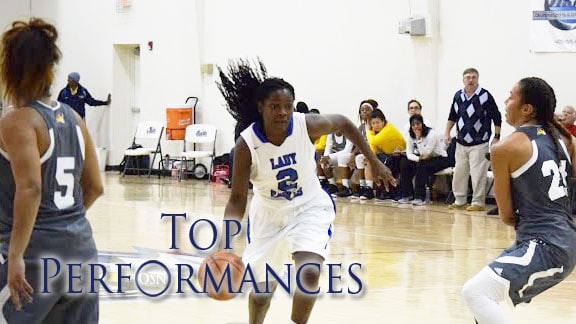 It was another fun year of college basketball in Oklahoma. Here are the Top 10 performances and performers in women’s basketball for 2015-2016.

No. 10 – Kamera Bozeman, Northwestern
The Rangers struggled through the 2015-2016 season, but there were some bright points and Bozeman provided many. The junior almost recorded a triple-double on Jan. 28 in one of Northwestern’s losses that was oh-so-close. Bozeman scored 28 points to go with nine rebounds and eight blocks, but NWOSU fell at Harding, 80-77.

No. 9 – Brandi Leal, Cameron, and Hailey Tucker, Southwestern
A senior and a freshman put on a shooting display in Weatherford in December. Tucker, a freshman and the All-OSN D-II Player of the Year, made eight three-pointers – one shy of the SWOSU single-game record – for 24 points, a then-career high for her. She was 8-of-17 from long range and also had five rebound and two blocks. Leal countered with eight made three-pointers of her own. The senior added a basket inside the arc to account for 26 points, along with four rebounds and two assists. The eight made three-pointers was a CU school record and Leal finished her career as the all-time Aggie leader in three-pointers made (180).

No. 8 – D’Shala Culberson, Mid-America Christian
Culberson had a perfect shooting night for MACU in a 87-56 win over St. Gregory’s on Feb. 6. The junior recorded a big double-double with 25 points and 19 rebounds, but did it in style as well. She didn’t miss all night. Culberson was 10-of-10 from the field and 5-of-5 from the free throw line.

No. 7 – Daniela Wallen, Oklahoma City
Wallen made quite a mark this season and was recognized as both the Newcomer of the Year and the Player of the Year in the Sooner Athletic Conference (and the All-OSN NAIA Player of the Year). Her stat line was regularly worthy of attention and finished the season sixth in points per game and fifth in rebounds per game in the country. She scored in double figures in all 28 games for OCU this season, capped by a 32-point performance in an 81-73 win at MACU on Jan. 14. Wallen’s 32 points went along with nine rebounds, five assists and five steals.

No. 6 – Kelsee Grovey, Tulsa, and Olivia Potter, Southeastern
Grovey and Potter were two of three players to make 10 three-pointers in a game in Oklahoma this season. (We’ll get to the third in a moment.) Potter connected on 10-of-20 from long range as the Storm overcame as 23-point second half deficit to take Harding to overtime, eventually falling 103-95 on Jan. 9. The junior scored a career-high 38 on the day, setting a GAC record with the 10 makes from behind the arc.
Grovey set a Tulsa school record with 10 made threes (10-of-13), scoring a career-high 32 points overall and had two assists and three steals, as well, as Tulsa beat UCF, 95-71, on Feb. 13. The senior finished the year as the all-time leader at TU with 233 made three-pointers.

No. 5 – Kelli Tolar, Mid-America Christian
Tolar finished the year as the fourth leading scorer in the nation at 19.78 points per game. Her biggest game of the year came at Chickasha in a 79-70 win over USAO. Tolar recorded a double-double of 43 points and 11 rebounds, with three assists, two steals and two blocks on Jan. 26. The 43 points was the second-highest single mark in the NAIA on the year. Tolar also ranked fourth in three-pointers made per game (3.259).

No. 3 – Brooke Grant, Hillsdale Baptist
Grant recorded a triple-double in the Lady Saints lone win against Arlington Baptist in four matchups this season. Hillsdale won 107-101 on Feb. 8, behind 22 points, 10 rebounds and 10 assists from the senior. The win kept alive what would ultimately be a 26-game winning streak for Hillsdale. The Lady Saints finished the year at 31-4 and national runners-up in the NCCAA Division II.

No. 2 – Rachel Wallace, Southeastern
Just one week prior, Wallace set a career-high scoring total of 28 points at OBU. Apparently, that wasn’t good enough. The junior blew up for 48 points in a 94-88 loss at Southwestern on Jan. 18. (Obviously the PCEC was a good place to score this year. See No. 9) And Wallace did it efficiently on 19-of 25 shooting from the field overall, making 10 of her 14 attempts from behind the arc. The 48 points scored set a GAC record and was the highest total in Division II during the regular season this year.

No. 1 – Andi McGill to Eliora Johnson, Southwestern Christian
Johnson had a solid 21 points and 13 points for the Lady Eagles on the road at MACU on Feb. 20.  But her final two were the most impressive as were down to the Lady Evangels in south Oklahoma City, 52-51, with less than a second remaining. McGill had to inbound the ball from the sideline, but was able to throw a perfect pass across the court to Johnson as she cut to the basket off a screen. Johnson grabbed the lob and in the air immediately put it off the glass for the game-winner as time expired.

Watch the shot from the SCU fans’ perspective: