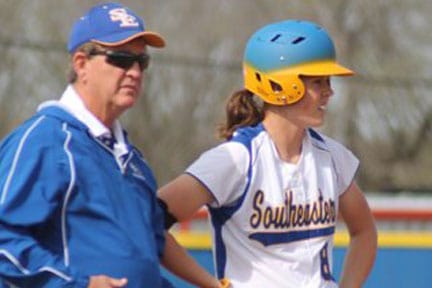 Bentonville, Ark. – The top seeded Savage Storm had been held scoreless through six innings by Southwestern.  But the No. 3 team in the country came back in dramatic fashion in the final inning to escape a first round loss in the Great American Conference tournament.

SOSU (41-7) moves on to face the winner of Arkansas Monticello and Southern Arkansas at approximately 8 p.m. tonight. SWOSU (16-35) will meet the loser of that game at 8 p.m. on another field.

It was an auspicious start for Southeastern from the first SWOSU batter.  The Lady Dawgs took advantage of it.

In the sixth, Smith got on with a double.  After Caitlyn Deas came in to run for her, a Megan Watson double brought her in, putting SWOSU up by two.

Southeastern scattered six hits through the first six innings, but the Lady Dawgs wouldn’t allow a score, though the Storm got close at times.  SOSU’s Jessica Simmons was caught stealing home in the fifth to end the inning.

But in the seventh, Southeastern finally broke through.  The Storm loaded the bases and Lacey Cook’s sacrifice fly sent home Darrian Williams.  Courtney Riddle’s single then sent in Paige Priest, and Simmons went to third.

Then with two outs, Southeastern went for the double steal and succeeded.  Pinch runner Rachel Jones stole second and Simmons, who had been put out just two innings earlier, made it safely home.  Southeastern walked off with the 3-2 win.

Mindy McElroy got the win for the Storm.