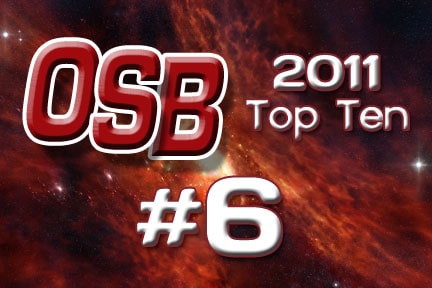 For most teams, going 9-3 is a successful season.  For the Sooners, it was a wipeout.
2011 started out with a No. 1 ranking and much promise and at the midpoint of the schedule, OU was 6-0.  But then, things went awry with an inexplicable loss to Texas Tech, the school’s first-ever setback to Baylor, and Bedlam blowout.
But the Red River Shootout took place in a happier time in the Sooners’ season and Oklahoma blew away Texas in a battle of unbeatens.  OU demoralized the Longhorns 55-17 in the Cotton Bowl.  Texas lost four of the next seven contests following the beatdown.
Oklahoma scored on its first four possessions and was up by 24 at the break.  Landry Jones passed for 367 yards, three touchdowns and completed 62 percent of his throws.

The Sooners defense even got in on the act and scored three touchdowns.
It appeared to be a sign of big things to come, but this was not to be the case.  However, the OU seniors go out having beaten their archrivals in back-to-back years and Oklahoma has now won three of the last five in the series.