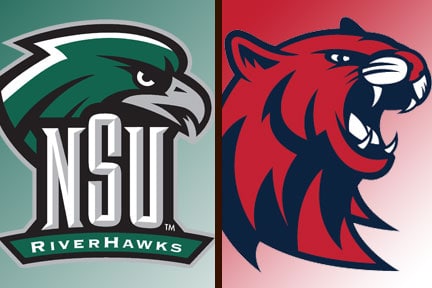 CLAREMORE – Rylie Torrey’s 27 points carried the RiverHawks to a 73-64 road win at Rogers State in Claremore on Wednesday night; the NSU sophomore went 6-for-9 from the arc and had 16 points by halftime.

Cailyn Long was NSU’s second leading scorer with 18 points and she was perfect in all six opportunities at the free-throw line. Mary Jane Buschmann had her 15th game in double-figures with 13 points and she led NSU with seven rebounds.

“I think we are continuing to make improvement,” said head coach Randy Gibson.  “We executed our offense and had our shooters in rhythm.  We were doing a good job at moving the ball and finding them…our team is still a work in progress on the defensive end and we have to shore up our defensive rebounding.”

NSU trailed in rebounding by seven to Rogers State who had 39.

Hot shooting at the arc had NSU in the lead for the majority of the first half and the RiverHawks made ten of their 12 shots from long range at the intermission.  Torrey hit four treys with Long sitting at nine points.  Rogers State stayed close on NSU with a slightly better shooting at 44.4-percent and took advantage of a NSU scoring lull and pulled ahead 24-22 off of a trey at the 5:34 mark.

The RiverHawks would close out the half on a 15-5 run and leave the floor with a 37-29 lead on the Hillcats.

In the second half, RSU used 43.8-percent shooting to close the gap on the RiverHawks and they pulled within three (50-47) with 25 seconds left in the third quarter.   The Hillcats stuck within two possessions until Torrey hit a three pointer at the top of the arc at the 7:21-mark in the fourth quarter to pull NSU ahead 59-51 to swing the momentum around the rest of the way.

The Hillcats were led by Rachel Block who had 15 points and Natasha Kindred with ten points.

Northeastern State will go to 2-1 overall and Rogers State moves to 1-2 this season.