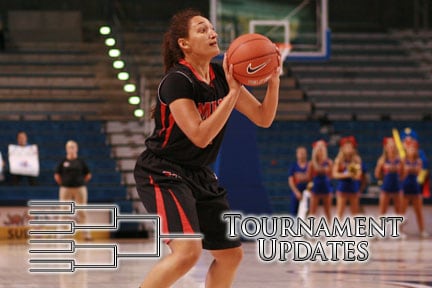 St. Gregory’s had one final opportunity to get a win against a conference opponent this season.  The Cavaliers made the most of it in the first round “play-in” game of the Sooner Athletic Conference tournament.

No. 9 seed St. Gregory’s upset the eighth seeded Wayland Baptist, 56-53, in the men’s SAC bracket at the Noble Complex in Shawnee.  It was the Cavaliers’ first postseason win in 16 years.

In the earlier game of the evening, the No. 8 seed in the women’s bracket held on over the No. 9 seed in a game that got close in the second half.

Mid-America Christian led by as many as 14 early, but staved off USAO to preserve a 69-64 victory.

USAO finished the year at 10-19.  Rocio Medrano paced the Drovers with 22 points and Paige Pulliam had a season-high 16 points in the loss.