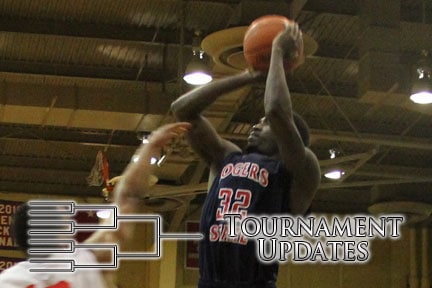 Updates from the SAC semis and RRAC quarters:

The battle of the lower seeds in the SAC semifinals went to the Oklahoma City Stars on Friday night.  After OCU countered an early RSU lead, the two teams battled closely throughout the game.  Charlton Jones had a game high 20 points for OCU.

The Drovers had a seven-point lead in the first half, but top-seeded John Brown came back and led at half time.  The Golden Eagles shot over 52 percent for the game.  USAO’s Norris Rumph put in 21 to lead all scorers, but five JBU players scored in double figures.

It was a defensive battle in Shawnee, as the top seed Stars advanced to the title game again with their 35th consecutive win over an SAC opponent.  Desiree Jeffries had 14 for OCU, bringing her career total to 1,003 points.

The Hillcats were not intimidated by an early LCU lead and came back to take a lead in the first four minutes of the second half.  But the Lady Chaps proved to be too much, shooting over 50 percent from the field.  Logan Froese had 21 points for Rogers State in the loss.

Top-seeded SAGU was up by as many as 20 in the second half, but Langston stayed close.  The Lions had four players in double figures, led by Jabril Bailey with 14.  Travis Scott produced a double-double with 12 points and 11 rebounds in the loss.

The Lady Warriors trailed by 10 in the first half, but pulled to within six at the break.  Bacone couldn’t get any closer than that in the second half, as the Lady Warrior fell to the top seed.  Danielle Reed had 17 points for BC.  Emily Lovell had 13 and was the only other BC player in double figures.

Foul trouble and poor shooting doomed the Lady Lions in their tournament loss. Langston shot only 26 percent from the field.  Tayla Vaughn had a double-double with 10 points and 12 boards.