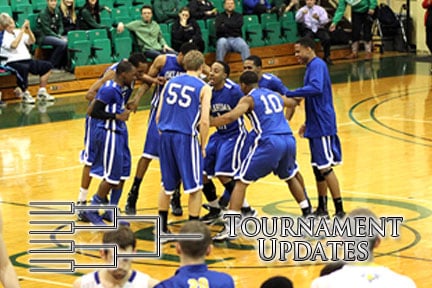 The Sooner Athletic Conference came to a close Saturday night with Oklahoma City University having representatives in both the men’s and the women’s brackets.  The teams split, but the results of the split were likely surprising to many.

For the second consecutive year, the SAC men’s tournament winner came from the bottom half of the seeding.  OCU defeated the top two seeds on the way to a tournament championship.  Charlton Jones had another great game on his way to being named Tournament MVP.  Jones had a near double-double with a team high 21 points and nine rebounds.

Lubbock Christian, who joined the SAC in 1994, won its first SAC Tournament title, taking down a team that had won its previous 35 games against league opponents.  Both schools held the top spot in the NAIA poll over the course of the year, but it was the Lady Chaps that got up in the first half and did not trail after halftime.

Desiree Jeffries had 22 points for the Stars in the loss.